April is one of the best months of the footballing calendar. Competitions are reaching their respective crescendos, the weather is nice enough that you can throw you parka in the bin for another year and there's even the Checkatrade Trophy final to look forward to.

April 2020 has been rather different from normal, for very obvious reasons.

To make us all feel a little less sad about the loss of football, 90min has powered up our time machine to relive some of the key events that happened on this day down the years. ​On this day in 1989, 96 Liverpool fans lost their lives during an FA Cup semi-final match between the Reds and Nottingham Forest at Hillsborough.

Derided by the tabloid press and ignored by the political establishment for many years, a grassroots campaign ran by the victims' friends and families would eventually achieve some justice in 2016, when it was ruled that the supporters had been unlawfully killed.

No one should ever go to a football match and not return home safely. Those who died will never be forgotten. ​With a visit from Real Madrid​Premier League

The Red Devils would go to secure the title the very next week...though Real would best them over two legs in Europe.

The Dutchman came off the bench in the 70th minute against West Brom and scored his final Arsenal goal in the 89th as we won 3-1.

After the Dutchman announced that he would be retiring at the end of the season, the Gunners designated their home match against West Brom as a day of tribute to one of their greatest ever players.

Supporters watched on, clad in orange DB10 shirts, as the forward shuffled onto the pitch as a 70th minute substitute for his Highbury swansong.

He soon proved that the magic that Arsenal had grown used to seeing during his 11 years at the was still present, as his stroked the ball home in the 89th minute to give his side a 3-1 lead. Fittingly, it was the last of his 109 Gunners goals.

​Cristiano Ronaldo is no stranger to a banging goal, but even by CR7's

Receiving a pass in a seemingly ​Controversy, aggro and lots and lots of goals, this FA Cup semi final between ​Chelsea and ​Tottenham had it all in 2012.

Never one to shy away from the big occasion, Didier Drogba put the Blues in front just before half time, before Juan Mata doubled their lead. The thing is, well, Mata's shot did not cross the line. In fact, it didn't even come close.

Spurs were unsurprisingly fired up by this injustice and pulled one back through Gareth Bale. While pushing for an equaliser, the floodgates opened and Chelsea bagged three goals in the closing 15 minutes to secure a famous victory.

After the game, Harry Redknapp spoke to Martin Atkinson about the incident which produced this absolute gem of a quote.

Getting nutmegged is the ultimate insult for a defender. Now, imagine it happening twice...in front of millions of people watching on television around the world...in the Champions League quarter final.

David Luiz does not have to imagine this nightmare scenario, as he lived through it five year years ago today.

His tormentor that night was the unstoppable Luis Suarez, whose two cheeky pannas both led directly to goals for the Uruguayan.

After getting hammered 7-1 by PSG on Sunday, Monaco have refunded all of their fans who went to the game. 欄

If you could choose the perfect way to win the title, defeating last year's champions 7-1 at home might just be it.

Two years ago today PSG did exactly that, enacting revenge against Monaco for their 2016/2017 title triumph by giving them a tonking at the Parc de Princes.

Giovani Lo Celso, Edinson Cavani, Angel di Maria and Julian Draxler all got on the scoresheet and Falcao even scored an own goal to further compound his side's misery. 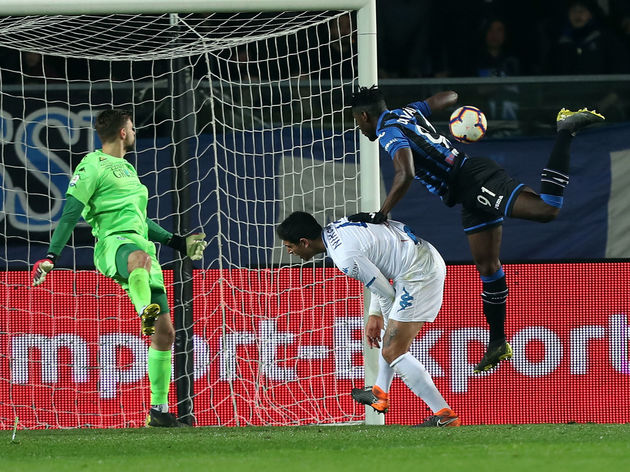 ​One year ago today, Atalanta had 47 shots in a game against Empoli.

You're probably bracing yourselves for a ridiculously high scoreline now aren't you? Think again. Astoundingly, this match finished goalless.

Bartłomiej Drągowski - Empoli's goalkeeper that day - deserves massive credit for his 17 saves, but that still leaves 30 shots unaccounted for. Finishing as bad as that should be illegal.