April 20, 2020, will not go down in history as one of the most memorable days in football history. We're sat waiting for the action to return, but nobody has any idea when that will actually be.

However, that's not to say that there hasn't been plenty of excitement on this day in the past. So, while there's nothing going on, it's time we reminisce about the good ol' days.

Here are some of the best moments from this day in history.

A busy day for Niall Quinn who scored and saved a penalty #OnThisDay in 1991! Superb!

It was a hectic day for former ​Manchester City striker Niall Quinn who, in 1991, scored and then saved a penalty in a 2-1 win over ​Derby County.

City goalkeeper Tony Coton was sent off for conceding the penalty, and with no substitute goalkeeper on the bench, Quinn stepped up to save the effort.

The best goal ever scored at Carrow Road? #ncfchttps://t.co/VbC3tonyVA

If you remember former ​Norwich City midfielder Youssef Safri, it's probably because he netted this outrageous long-range strike against ​Newcastle United in 2005.

He managed just seven goals during his entire career, so it's safe to say most fans didn't exactly see this one coming.

2010 - Inter Come From Behind to Stun Barcelona

José Mourinho one-upped Pep Guardiola as his ​Inter came from behind to pick up a stunning 3-1 win over defending champions ​Barcelona in the 2010 ​Champions League semi-final.

Inter lost the second leg but still advanced on aggregate (cue Mourinho's iconic celebration), and they went on to beat Bayern Munich 2-0 to win the competition. ​Arsenal's hopes of winning the 2010/11 ​Premier League title were dealt a huge blow when they threw away a two-goal lead to draw 3-3 with cross-town rivals ​Tottenham Hotspur.

It was 1-1 after just seven minutes, but the Gunners went 3-1 up in the 40th minute thanks to goals from Samir Nasri and Robin van Persie. Tom Huddlestone bagged another for Spurs on the stroke of half-time with a ferocious strike from distance, setting up an enthralling second half.

Rafael van der Vaart's 70th-minute penalty earned Spurs a share of the spoils in what was one of the most exciting London derbies in recent memory.​ 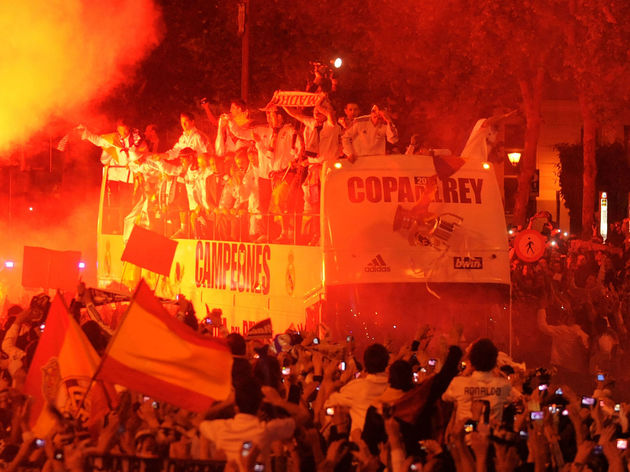 20/04 - #OnThisDay in 2014, @LeroySane19 made his #Bundesliga debut for @s04_en - since then, he provided more assists in the Big 5 European leagues than any other player born in 1996 or later. InSane. pic.twitter.com/zMoTgatLSo

In 2014, a fresh-faced Leroy Sané was handed his debut for ​Schalke as his side fell 3-1 to Stuttgart.

He needed just two years in the senior side to prove to Manchester City that he was worth £37m, but could he be on the move once more this summer? David Moyes' time at ​Manchester United started to come to an end on this day in 2014 as the Red Devils were thumped 2-0 by Moyes' former side, ​Everton.

​The Scot was sacked two days later, having managed just ten months in the job - the third-shortest managerial spell in club history.

​Liverpool stormed to a dominant 4-0 win over Everton in 2016, giving Jürgen Klopp a perfect first taste of the Merseyside derby.

Divock Origi, Mamadou Sakho, Daniel Sturridge and Philippe Coutinho all got themselves on the score sheet, while

 OTD in 2018, Arsène Wenger announced he would step down as Arsenal boss at the end of the season ❤️

Le Professeur was a gentleman until the very end pic.twitter.com/CZBGnuVp45

Arsène Wenger's time with Arsenal began winding down on this day in 2018 after he confirmed his intention to leave the Emirates Stadium at the end of the season.

Across his 22 years with Arsenal, Wenger led the team to three Premier League titles and lifted the FA Cup an incredible seven times​, making him the most successful manager in the history of the cup. Having reformed in May 2018, Manchester United Women clinched the Women's Championship title in 2019 after storming to a 7-0 win over ​Crystal Palace, sealing a spot in the Super League as a result.

They enjoyed an impressive first showing in the competition, climbing up to fourth before football was postponed.​