It feels like we can almost see a light at the end of the tunnel (maybe). Leagues around Europe are making baby steps towards their return, but there's still a long way to go until football as we know it is back.

For now, we'll have to make do with another dive into the vault to have a look at some of the best moments from this day in history.

This date (23rd April) has seen two of the greatest individual performances of all time, but only one was on the pitch. The other? That was on Twitter.

Here's a look at the best moments from this day in history.​

The club were the first Manchester side to win a major trophy!  pic.twitter.com/4Uiu0Sz5zN

Five years after joining the Football League, ​Manchester City landed their first major trophy when they lifted the FA Cup way back in 1904.

The Citizens picked up a 1-0 win over Bolton Wanderers thanks to a goal from Billy Meridith, who many claimed was actually offside. Unfortunately for Bolton, nobody really cared.

Back in the days: my debut in professional football @AFCAjax. The beginning of the journey...理 pic.twitter.com/CgBcpZpv7S

On this day in 1991, a fresh-faced Edwin van der Sar was handed his Ajax debut by manager Louis van Gaal in a 1-0 win over Sparta Rotterdam.

He went on to make 312 appearances for Ajax, before turning out for ​Juventus, Fulham and ​Manchester United during his illustrious 20-year career.

Manchester United beat ​Real Madrid 4-3 in their ​Champions League quarter-final, but it wasn't enough to steer them through to the next round on aggregate. Unfortunately for the Red Devils, they came up against Ronaldo in the form of his life.

The Brazilian superstar bagged one of the most dominant hat-tricks of all time, prompting everyone inside Old Trafford to give him a standing ovation as he was substituted. ​

The absolute scenes when this went in 

​Marlon Harewood sent ​West Ham United fans wild when he fired the Hammers through to the FA Cup final in their 1-0 win over Middlesbrough.

The team then came within seconds from winning the competition, only for ​Liverpool's Steven Gerrard to bag a late equaliser and send the game to extra-time and penalties, from which the Reds emerged victorious.

Rio, It's been 9 years, do you want picking up in the morning or not pal? pic.twitter.com/86vqzjYEP7

​It took Wayne Rooney a little while to figure out how Twitter worked.

Fortunately for us, his lack of technical know-how gifted us one of the most iconic tweets of all time.

Did Rooney ever actually pick Rio Ferdinand up in the morning? That's the only question we want answering.

Want more of Wazza's best-ever tweets? Course you do. Well, ​click here then.

Maxi Rodríguez wasn't at Liverpool for long, but his most memorable moment in a red shirt came on this day in 2011 as he fired home three goals in a 5-0 win over Birmingham City.

Two of the goals came from awful goalkeeper deflections, but that's not the point. A hat-trick's a hat-trick. The 2012/13 Champions League was one of the most surprising in recent memory as Germany completely humiliated Spain in the semi-finals. Firstly, we had ​Bayern Munich thump ​Barcelona 4-0 on this day.

The second leg finished 3-0, giving Bayern a 7-0 win on aggregate. 7-0. No wonder they won the competition that season.

2014 - Real Madrid Get Some Spanish Revenge Clearly looking to rebuild Spain's reputation after being emphatically humbled just one year earlier, Real went on to win the final and kick-start a run of four trophies in just five seasons.

Alexis Sánchez was the star for ​Arsenal in their FA Cup semi-final against Manchester City in 2017 (when he was actually good at football), bagging an extra-time winner to send the Gunners to the final.

They had to come from behind to beat City 2-1, and they went on to match that scoreline in the final against ​Chelsea. 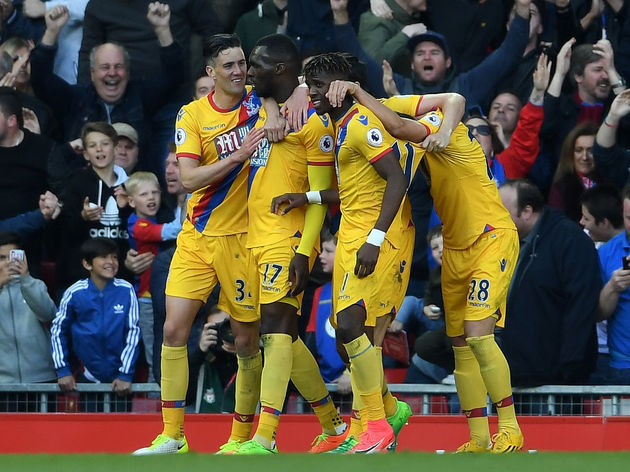 It's hard to remember a time when Liverpool actually lost games at Anfield. In fact, at the time of writing, their last home defeat came on this day in 2017. That's T H R E E years ago

​Sam Allardyce's ​Crystal Palace picked up an unlikely 2-1 win thanks to two even more unlikely goals from Christian Benteke.

What a weird time that was.

Barcelona and Real Madrid were drawing 2-2, and with just seconds left, it looked like there would be no winner in El Clásico. Enter ​Lionel Messi.

The Argentine, who had bagged his side's first goal of the game, curled in a beautiful effort to seal the win, before running to the corner flag, taking off his shirt and making sure everyone knew his name.

You know, because they obviously didn't already.