On This Day in Football History - April 25: Cruyff is Born, Arsenal Win Title at Tottenham & More

In normal circumstances, today would have been a significant afternoon in the footballing calendar.

League One, League Two and much of the non-league pyramid were supposed to be reaching their respective crescendos, while many other divisions around Europe were also drawing to a close.

Instead, we're all staring down the barrel of yet another weekend without any football. Bit rubbish isn't it?

We know what will make you feel better. A lovely, warm dose of nostalgia. With that in mind, here are some of the best footballing moments that occurred on 25 April down the years. 73 years ago in Amsterdam, a star was born. Hendrik Johannes Cruijff would go on to become one of the most influential footballing figures of the 20th century, starring as both a player and a coach.

He started his career at Ajax where - alongside coach Rinus Michels - he pioneered Total Football, winning three consecutive European Cups in the process. He left for ​Barcelona in 1973 where he continued to carve out his legend, before taking in spells in the United States and at Levante.

He returned to Ajax in 1981 where he won back to back Eredivisie titles and then spited the club by repeating the feat with rivals Feyenoord after they refused to offer him a new contract.

Cruyff was a complex, fascinating character who deserves many more words than we are able to afford him here - and it all started on this day over 70 years ago.

Happy birthday to the greatest own goal ever. Jamie Pollock, #OnThisDay 22 years ago.pic.twitter.com/RYSHenRNxh

​​Spare a thought for Jamie Pollock. Though he was part of two teams that won promotion to the ​Premier League in the 1990s, he will only ever be remembered for one thing - scoring the best own goal of all time.

On the penultimate day of the 1997/1998 season, relegation threatened Manchester City and QPR met at Maine Road.

With the scores level at 1-1, a backtracking Pollock knocked the ball over his own defence before finishing it off with a pinpoint, looping header.

The goal condemned City to relegation to the third tier, while ensuring that the Hoops stayed up. QPR fans haven't forgotten Pollock's goal either, voting him ​Goodness gracious, imagine winning the league at the home of your bitter rivals.

16 years ago ​Arsenal did exactly that, clinching their third Premier League crown at White Hart Lane. Going into the game, the Gunners needed a draw to get over the line and had looked like winning until Robbie Keane converted a 94th minute penalty to make it 2-2.

Unsurprisingly, that did little to dampen the mood with the Invincibles continuing to party on the pitch long after ​Spurs fans had vacated. 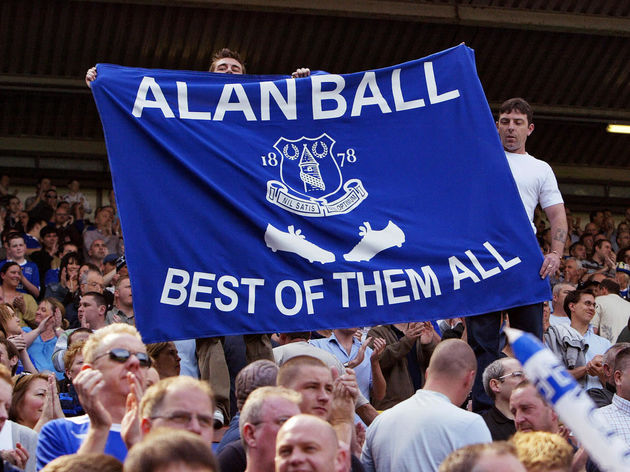 ​On this day in 2007, the football family sadly lost Alan Ball - a true legend of the game.

He was the youngest member of England's 1966 World Cup winning squad and was much loved a host of clubs, including ​Everton, Arsenal and Blackpool.

After a 23 year playing career, Ball moved into management, taking in eventful spells at Portsmouth, Southampton and ​Manchester City among others. Five years ago, ​Leicester moved out of the ​Premier League relegation zone for the first time since November 2014 courtesy of a 1-0 win over Burnley at Turf Moor.

The Foxes looked to be heading for their first defeat in four games when the Clarets were awarded a penalty in the 58th minute - only for Matty Taylor to miss and Jamie Vardy to snatch a winner 59 seconds later.

Leicester would use the result as a springboard to complete a great escape that seemed unfathomable at the start of April, when they were seven points adrift of safety with just eight games to play.

Note to politicians: If you're going to pretend to be a football fan, at least remember the correct team! pic.twitter.com/Hgbiqi5te3

With football being the United Kingdom's favourite pastime, it makes sense for politicians to at least pretend to have some interest in the sport - even if they are more of a rugby/Eton fives/fox hunting kind of person.

Former Prime Minister David Cameron was a big fan of this concept, frequently claiming to be 'Aston Villa til' he dies'.

Unfortunately, Cameron outed himself as a footballing

On this day in 2016, Juventus won their 34th Scudetti and 5th in a row after second placed Napoli lost to Roma 1-0!https://t.co/nm21MDgXn1 pic.twitter.com/fUyMQODtYT

Four years ago, Roma bested Napoli 1-0 to ensure that ​Juventus could not be caught at the Serie A summit.

Standout performances from the likes of Paulo Dybala - who scored 23 goals in all competitions - and their stubborn backline of Leonardo Bonucci, Andrea Barzagli and Giorgio Chiellini were big factors in the club's continued dominance.

The season also marked Paul Pogba's final year at the club, with the Frenchman securing a big money return to Manchester United the following summer.