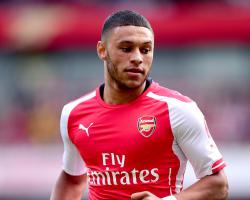 The Gunners battled to a goalless draw at the cauldron of the Ataturk Olympic Stadium in Istanbul on Tuesday night, where midfielder Aaron Ramsey was sent off late on for a second yellow card and so will miss the return leg back in England next week.

Indeed, but for a late fingertip save by Tolga Zengin to push an angled drive from substitute Oxlade-Chamberlain onto the post, Arsenal might even have snatched a crucial away goal which to defend back in London next Wednesday night.

Oxlade-Chamberlain knows Arsenal have to first match the work-rate shown by Slaven Bilic's well-organised side - who hit the crossbar from kick-off through former Chelsea striker Demba Ba - before then looking to make the most of their own talents, which will be boosted by the return of German World Cup winners Mesut Ozil, Per Mertesacker and Lukas Podolski ahead of Saturday's trip to Everton.

"We have to have confidence in ourselves to come through this test," Oxlade-Chamberlain said.

"Besiktas are a quality side, and it is not going to be easy at all, they will fancy their chances as well, which will make it a good game.

"But I am confident in our team, if we approach the game in the right way, match them physically and competitively, then hopefully our technical side of our game will come through at the Emirates and we will be able to come away with a win."

Arsenal could expect to earn around Â£7million from reaching the group stages for what would be a 17th consecutive season, with each subsequent home match worth around Â£3million of additional match-day revenue.

"It (Champions League) is something that everyone wants to play in, especially at a club like Arsenal, you almost expect us to try to qualify for," he said.

"We worked extremely hard last season to get ourselves into this position and it is something we don't want to give away at this stage.

"It is massive for the club, for the players and the supporters, we all know how important it is and I am sure you will see next week how much everyone wants to be a part of the competition."

Arsenal will assess the fitness of captain Mikel Arteta after the midfielder left the stadium in a protective boot around a twisted ankle and so could miss the return to his old club.