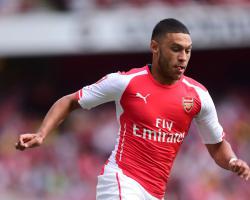 The Gunners ended a nine-year wait for silverware when they beat Hull at Wembley in May - a victory that eased the disappointment of another underwhelming league finish.

Arsenal spent more than 100 days at the top of the Barclays Premier League last season but had to settle for fourth, seven points behind champions Manchester City, who they face in the Community Shield on Sunday.

"When there's a lot of talk about a team that should or could be winning things and it's not happening it can become a little bit frustrating," Oxlade-Chamberlain said.

"There's been a little bit of negative media about Arsenal in recent years but we always believed we would win a trophy soon and the squad we're putting together could do it.

"The fact it did happen, I don't know if it was a relief, it was a really nice reward for the togetherness we've had to show for a while now.

"It does start a winning momentum and once you know you can win, it gives you confidence - you can go into competitions thinking you can win and expecting to go far."

Arsenal have made bold moves in the transfer market this summer with the signings of Alexis Sanchez, Mathieu Debuchy, Calum Chambers and David Ospina.

Sanchez, who scored 19 goals for Barcelona in La Liga last season, cost around Â£35million and is the club's second most expensive signing after Mesut Ozil arrived for Â£42.4million last year.

"It's really exciting to see someone like Alexis Sanchez come in as well as Mathieu Debuchy and Calum Chambers," Oxlade-Chamberlain said.

"It definitely brings a really good lift to the squad - I feel it myself.

"When you're playing with new players like that you want to get to know them, try to impress them and you want to gel with them as quickly as possible.

"It does bring a massive lift of excitement to the squad and we haven't even seen Mesut Ozil yet - when our Germany World Cup winners come back it will give us another lift again."

Oxlade-Chamberlain's trip to Brazil was less successful, though.

The 20-year-old suffered a knee injury towards the end of the season and while he was included England's squad, he was unable to take part as Roy Hodgson's side crashed out in the group stages.

"I got to be around an England team at a World Cup in Brazil and that was an amazing experience," Oxlade-Chamberlain said.

"I had it in my mind I was going to play - come the last group game I would have been fit to play but then I got a little niggle in training and we didn't feel the need to risk anything considering we were already out.

"It's just a shame we went out and we didn't go far enough for me to participate.

"It was a great experience, it was my first World Cup, I went to the Euros but to see a World Cup was an amazing thing."

Oxlade-Chamberlain has his work cut out to get on the pitch for Arsenal this season too given the wealth of midfield options at Arsene Wenger's disposal.

The youngster is jostling for a starting spot alongside the likes of Santi Cazorla, Jack Wilshere, Mikel Arteta, Aaron Ramsey and Mathieu Flamini.

"It's going to be tough for everyone to get in the team this year," Oxlade-Chamberlain said.

"There's going to be a lot of competition for places and that's a good thing.

"In the back of my mind I'd obviously like to play as much as I can but I haven't set any real goals other than the ones we've all set.

"They are the only things I'm focused on, especially after the FA Cup last season - it makes you want to strive for more."

One player who looks increasingly unlikely to feature in Arsenal's season is defender Thomas Vermaelen.

Press Association Sport understands Vermaelen is close to a Â£15million-move to Barcelona and could complete the transfer this weekend.

On Thursday, manager Wenger suggested the club's preference was to sell the Belgian abroad, rather than to a domestic rival, with Manchester United also interested.