Oxlade-Chamberlain back on track 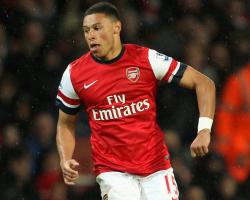 The imminent return of the all-action 20-year-old, who has been out since the opening day defeat by Aston Villa, comes as a welcome boost for the Gunners at the end of what has been a difficult week following the news Theo Walcott would play no further part in the campaign after sustaining anterior cruciate ligament damage during the closing stages of the 2-0 FA Cup win over Tottenham.

Oxlade-Chamberlain has stepped up his rehabilitation programme and is pencilled in for the Under-21s fixture at Fulham on Thursday.

If all goes well, he could be drafted back into the first-team picture after the next Barclays Premier League game at Aston Villa on Monday night.

The former Southampton trainee - who signed for Arsenal in a Â£12million deal during the summer of 2011 - scored for England in the 2-2 draw against Brazil at the Maracana Stadium last June and would like nothing more than to return to South America with the Three Lions this summer.

"As a young guy growing up watching football and watching World Cups, this will be my first one (that I can play in)," Oxlade-Chamberlain told Arsenal Player.

"Obviously I went to the Euros (2012 in Poland/Ukraine), which was an amazing experience - and that's a massive achievement for me personally, especially as an 18-year-old boy. That was really special.

"But the World Cup is always that little bit more special because it is the world stage. If I was able to be selected and go to Brazil, it would be a dream come true and something that I am definitely striving towards.

"Although for now I am just focused on getting back in and around the Arsenal team and helping us do well this season, (going to) the World Cup is definitely something I would like to achieve."

Arsenal will be out to consolidate their position at the top of the table at Villa Park, with title rivals Chelsea and Manchester City both able to overtake them if they win earlier in the weekend.

"The Premier League this year is the most difficult one since it has existed," the Spaniard said.

"I think you have four or five teams looking to win it. We are going to put everything in to win it.

"We had a little spell where we had a difficult time, but we have come back and we are feeling good."

Arsenal manager Arsene Wenger will look to strengthen his squad during the January window, although perhaps with short-term options rather than any of his main big-money targets - such as Atletico Madrid's Diego Costa and Mario Mandzukic at Bayern Munich - which are likely to have to wait until the summer given the reluctance of clubs to sell at this time of the season.

With Nicklas Bendtner (ankle) and France Under-21 international Yaya Sanogo (back) still a few weeks away from full match fitness, Wenger is expected to seek cover for lead striker Olivier Giroud, who missed the Spurs match because of illness after shaking off a minor ankle injury, but is expected to be available at Villa Park.

Arsenal are said to be keen on a loan deal for Real Madrid's promising 21-year-old Alvaro Morata, whose current first-team opportunities are limited at the Bernabeu. However, the Spanish giants may well not be amenable to the request as Carlo Ancelotti views him as needed back-up for Karim Benzema.