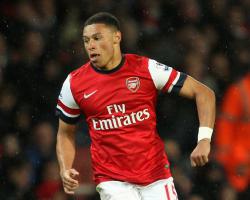 The 20-year-old midfielder had not played since the opening day of the season because of a knee problem, but featured for the opening 45 minutes for the club's under-21 side against their Fulham counterparts at Motspur Park.

The former Southampton man's return comes at a timely moment for Wenger, with Theo Walcott having this week been ruled out for the rest of the season.