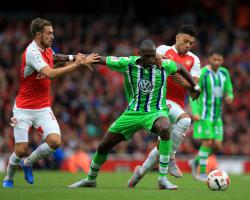 The vast majority has not been too positive; 1 win 3 does not signal title aspirations, even if it is so early on in the season

Against West Ham the Gunners looked sluggish and devoid of ideas

Palace were unlucky not to get something against ArseneÃâs men, and despite a much better performance against Liverpool in the second half, letÃâs be honest the first half was very painful viewing for Arsenal fans

Tactically questions are also being asked; questions like why does Arsene wait so long to bring on a substitute? Or why did he not exploit Tomkins who was played out of position in the West Ham game, or why he left it so late to bring on the Ox and Theo against an 18-year-old fullback in Joe Gomez?

However, his pace and strength is frightening

He has an eye for goal, as he showed in the Community Shield with the brilliant winner against Chelsea

WhoScored.com is a great website offering analysis on both Aaron and The Ox and is definitely worth checking out.

Despite Alex Oxlade-ChamberlainÃâs defensive game not being as good as Aaron Ramsey, Arsenal fans want to see entertainment

Maybe, just maybe it is time to give the Ox a proper run in the team ahead of Ramsey

I feel a bit sorry for Ramsey as he has been played out wide, which is not his ideal position and Arsene has a habit of playing players out of position

So who is it for you? Should Arsene Wenger stick with Aaron Ramsey or should he give the Ox a proper run in the team? Or do you think there is room for both of them?

Article author Fevzi Hussein can be followed on Twitter @fevzihussein.