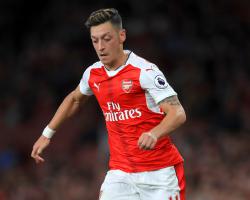 The Gunners went into the international break in good form, with a last-gasp 1-0 win over Burnley extending their unbeaten run to nine in all competitions, with five successive victories.

Defensive midfielder Francis Coquelin has been recovering from a knee injury and could be back in contention for Saturday's home Premier League match with Swansea which is swiftly followed by a Champions League fixture against Ludogorets.

While Wales international Aaron Ramsey is now back in full training following a hamstring problem which has sidelined him since the defeat by Liverpool in the first match of the new campaign, the 25-year-old is not expected to be rushed into a return until fully ready.

Wenger will also be looking to receive more positive news when the squad reassemble at the club's Hertfordshire training base.

Ozil was substituted at half-time during Germany's 2-0 win over Northern Ireland on Tuesday night.

The midfielder, though, posted a reassuring message on his personal Twitter account to play down any worries he was carrying an injury

"Thanks for taking care because of my substitution but everything is all right guys," Ozil wrote

While Kieran Gibbs, Alex Oxlade-Chamberlain and Theo Walcott were all away with England, Alex Iwobi scored his first international goal for Nigeria in the 2-1 World Cup qualifier win in Zambia

The 20-year-old has taken his chance this season after being drafted into the first-team group by Wenger .

Ozil has been impressed by the impact of Iwobi, nephew of Jay-Jay Okocha.

"He knows exactly what he can do

He isn't scared and doesn't hide on the pitch

He just wants to have fun playing football and that really shows on the pitch, and also in training," Ozil said on Arsenal Player

"He's developing really well and if he continues the way he's been playing the whole season, he will really enhance his game.

He is really young and is on a really good path."