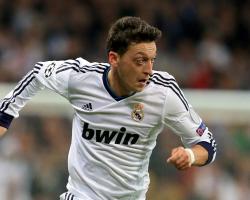 The Arsenal midfielder was a Real player from 2010 to 2013, coinciding with Mourinho's stint as manager at the Bernabeu.

In his autobiography Die Magie des Spiels (The Magic of the Game), which is being serialised by German newspaper Bild, Ozil recalls an occasion when Mourinho tore into him during half-time in a match.

The extract does not detail the date of the game or the opposition, but reveals the conflict behind closed doors as Mourinho, now in charge of Manchester United, took aim at the Germany international

You think you're too elegant to go into tackles

You think you're so good that 50 per cent is enough."

According to Ozil, the stand-off became "l ike two boxers at the stare-down before the first round"

"He shows no emotion," Ozil writes

"He is just waiting for a response from me

How much I hate him right now

But at the same time I love Mourinho."

Mourinho then added, according to Ozil: " I want you to play as well as you can

I want you to go into tackles like a man

Do you know what tackles look like? No? I'll show you."

Ozil explains that he then threw down his shirt at Mourinho's feet and told him he should play, if he knew the game so well

That was the trigger, Ozil writes, for Mourinho to say: "Oh, are you giving up now? You're such a coward

What do you want? To hide away under the lovely warm shower? Wash your hair? To be alone? Or do you want to show me, your fellow players and the fans out there what you can do?"

"After a few days, I confessed to him that it had clicked in my head

And I am grateful to him for showing me so clearly what was my greatest weakness," Ozil writes