Ozil confident for next season 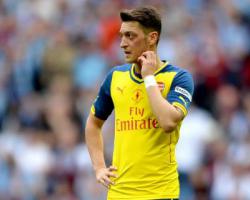 The Gunners were one of the form teams since the turn of 2015, securing third place in the table and beating Aston Villa 4-0 at Wembley to retain the FA Cup.

There was, though, a lingering sense of what might have been, following a disappointing exit to Monaco in the last 16 of the Champions League and not being able to reel in Chelsea having paid a heavy price for their slow start.

However, Ozil, who missed some three months of the campaign because of a knee injury suffered in October, is confident Arsene Wenger's squad can return stronger for the challenges ahead.

"We had bad luck with injuries this season, but next season we can win the Premier League and go further in the Champions League," Ozil said in an interview with German magazine Kicker.

Ozil admits it was the "hardest" campaign of his career, having come off the back of Germany's World Cup triumph in Brazil.

However, the 26-year-old won over many critics with a string of impressive displays as the Gunners recorded 10 victories from the final 15 league matches.

I feel it was a consequence of playing a lot games without a break over years," added Ozil, who joined Arsenal in a club-record ÃÂ£42.5millon deal in September 2013.

"I was happy with the second half of the season

I wanted to show everybody that I am back.

"Winning the FA Cup means it was a successful year, so I am proud of that win."

Ozil was glad to be able to repay the faith of manager Wenger, and also now become a firm fans' favourite.

The fans cheered a lot when I was brought on

That was a brilliant feeling and helped me a lot.

"From then on I understood: no matter what happened, the club and the fans are always with me.

"But the most important thing is the opinion of my coach

I always had that feeling with Arsene Wenger."

Arsenal are expected to further strengthen the squad over the summer, with Chelsea goalkeeper Petr Cech said to be top of Wenger's wanted list.

The Gunners boss must also decide on the future of forwards Lukas Podolski, Yaya Sanogo and Joel Campbell, who has been linked with Fenerbahce, following loan spells.

Midfielder Abou Diaby, meanwhile, may yet still feature in Wenger's plans for next season.

The 29-year-old Frenchman, who has been plagued by injuries, was named on the Premier League's released list of players out of contract at the end of June.

However, it is understood Diaby, who made just one appearance last season, in the Capital One Cup, remains keen to agree another short-term deal, one which is likely to be appearance-based, and is set to continue training at the club's Hertfordshire base over the coming weeks.

Arsenal will head to the Far East as part of their pre-season plans, with matches during mid-July in the Barclays Asia Trophy Singapore, where both Everton and Stoke will also feature.