Ozil- Im one of worlds best 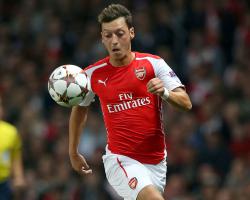 The Germany international struggled to live up to his Â£42million transfer fee after joining the Gunners from Real Madrid last season, though he did end the campaign as an FA Cup winner.

That Wembley win over Hull was followed by World Cup success with his country this summer but still questions persist over whether he can impose himself in the Barclays Premier League.

Ozil, though, told the Daily Telegraph: "The opinions of fans are important to me and I'm happy they have such high expectations of me

I have high expectations of myself

Fans, coaches, players and everyone knows that my best position is playmaker

It's different playing on the left

"When I was in Madrid, I often played on the right

On the left, it's more difficult."

Manager Arsene Wenger defended the 25-year-old on Friday, likening him to a virtuoso musician and suggesting Ozil's lack of aggression and defensive ability fuels a perception of him as 'lightweight'

Wenger said: "People are very harsh on Ozil because he's a player who is easy with his play

"He's like a guy who plays music with perfect timing

Ozil is grateful for the Frenchman's support

He said: "The whole club can be proud to have such a fantastic manager with so much experience, playing with style and doing so many great things for 18 years here

"The boss has always blooded youngsters, and helped make them into some of the best players in the world

That's also why I came here

I wanted to develop myself further."

Having got into the habit of lifting trophies this summer, Ozil is keen for more

"Of course Arsenal can win the Premier League," he said

We have the potential to reach the final."