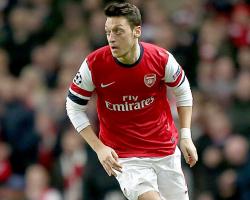 The last-16 loss leaves the Gunners with a mountain to climb in the second leg at the Allianz Arena on March 11, but it could have turned out very differently had Ozil's spot-kick not been saved by Bayern goalkeeper Manuel Neuer in the first half.

The Gunners were reduced to 10 men when goalkeeper Wojciech Szczesny was sent off for clattering Arjen Robben in the box, and although the resultant penalty was also missed, goals from Toni Kroos and Thomas Muller did the damage.

outnumbered it was really hard to win against this team

Ozil made a promising start following his Â£42.5million signing from Real Madrid at the end of the summer transfer window but has struggled to make an impact in the last few months.

"We have a lot of games here in England and everyone is tired, but it is not just up to Mesut," said Mertesacker, who himself has developed into a consistent performer for Arsenal following an underwhelming start at the north London club after signing from Werder Bremen in August 2011.

"Mesut has played a lot of games and he is a massive player, we need him at his best

Game by game, he will come back stronger."

Arsenal shareholder Alisher Usmanov, who has long called on the Gunners board to make the sort of investment on players that they finally did in signing Ozil, believes the German is tired.

"Ozil was not (playing) at his capacity, maybe because he is tired," Usmanov told reporters as he left the director's entrance at the Emirates Stadium, where he holds a private box.