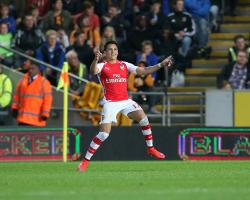 The awards are endorsed by the players and supported by the clubs.

The shortlist has representatives from six teams in the Premier League and at least one player from every position is represented and is in with a chance of winning the award.The shortlist will be whittled down to the five players with the highest number of votes on Tuesday 19thMay, with the final deadline to vote at midnight on Monday 25th May

The winner will then be announced on Tuesday 26th May.

The Chelsea strikerÃâs first season in English football has been very successful, and he was crowned the PFA FanÃâs Player of the month in September after scoring eight goals in his opening six games for the club

But for injuries in the second half of the season Costa would almost certainly have scored more goals, but nevertheless a blistering start to life at Stamford Bridge makes him a worthy inclusion in the Fan Player of the Season shortlist

Sanchez scored in ArsenalÃâs 2-2 draw with Hull at the start of the month, and provided the assist for Danny WelbeckÃâs stoppage time equalising goal

Sanchez scored twice in the FA Cup semi-final victory over Reading, and the north London club will meet Aston Villa at Wembley at the end of this month for a chance of silverware

SanchezÃâs fine form for Arsenal also saw him included in the Premier League team of the year.

The first came as Manchester United beat Crystal Palace 1-0 at Old Trafford and then De Gea put in a man of the match performance to help the Red Devils overcome Arsenal 2-1 at the Emirates Stadium, making a string of fine saves to keep Arsenal at bay

De GeaÃâs impressive form for Manchester United also saw him included in the PFA Premier League team of the year.

In total, Cazorla has scored seven goals this season in the Premier League and set up nine goals for his teammates.

Coutinho followed this up with a man of the match performance against high flying Southampton, scoring the opening goal in a 2-0 victory at St MaryÃâs

CoutinhoÃâs impressive season for Liverpool also saw him included in the Premier League team of the year.

KaneÃâs excellent form throughout March saw him win his first international caps, scoring less than three minutes into his debut against Lithuania

Kane was recently named the PFA Young Player of the Year

In total Kane has scored 20 goals in the Premier League this season, and has scored over 30 in total.

Kane was also included in the PFA Premier League team of the year.

Ozil played a key role in the FA Cup semi-final victory over Reading setting up both goals for Alexis Sanchez.

Under the guidance of Jose Mourinho, Hazard has enjoyed his best season in a Chelsea shirt since moving to the club and has scored 14 premier league goals, providing his teammates with eight assists

The Chelsea midfielder was recently crowned PFA player of the season in recognition of a series of outstanding performances and he was also included in the PFA Premier League team of the year for the second consecutive season.

In whatÃâs been a largely disappointing season for last seasonÃâs champions, AgueroÃâs goal scoring form has remained constant throughout

Whenever Aguero has played he has looked a threat and had he not missed a month of the season through injury, then Manchester City may have posed a bigger threat to Chelsea during the second half of the season

Aguero is a natural finisher and his goals alone make him a worthy candidate for the fans player of the season award, especially if he goes on to win the golden boot again this season.

His tactical awareness on the pitch, his organisational skills and his leadership are all qualities that Chelsea have been able to call upon during the run in the last few weeks where they have had to grind out results and Terry has perhaps enjoyed his most consistent season in a Chelsea shirt to date

TerryÃâs fine saw season for Chelsea also saw him included in the PFA Premier League team of the year.