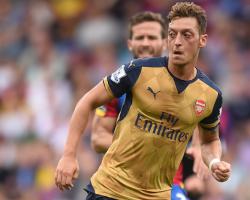 The Gunners recovered from their opening-day home defeat by West Ham to record a battling 2-1 win at Crystal Palace last weekend.

Liverpool, though, head to north London on the back of successive victories from their first two matches.

The Reds were defeated 4-1 at the Emirates Stadium in April, with Arsenal going on to claim third place before lifting the FA Cup again at Wembley.

Ozil, who netted a fine 25-yard free-kick in that encounter, believes Monday night provides another opportunity for the Gunners to show just what they are capable of.

"I remember that we delivered a really convincing display

We want to do that again this time," Ozil told Arsenal Player.

"We are at home and we know exactly how we can beat Liverpool; that is what we want to do on Monday.

"We were highly concentrated

That's what we will have to do on Monday again.

"We have to believe in ourselves as we have the potential to beat every team and we will show that on Monday."

Ozil delivered a virtuoso display at Selhurst Park last Sunday, completing a 98 per cent pass accuracy which included setting up Olivier Giroud for the opening goal.

It has been a solid transition for the German playmaker, who became the club-record signing when he joined from Real Madrid in September 2013.

Gunners boss Arsene Wenger has been impressed by the progression of the World Cup winner.

"Mesut is now completely committed to the club

He came from Real Madrid and he didn't know how long and whether it would work for him, whether he would enjoy it or not," Wenger said.

"I believe now he is completely on board, committed and focused on the results of the club."