Pierre-Emerick Aubameyang scored and was sent off as ​Arsenal were forced to hold on to a draw against Crystal Palace, where Jordan Ayew's deflected strike cancelled out an early opener.

It was like a training exercise throughout the opening stages of the match and the visitors were able to take a deserved lead when Aubameyang finished off a brilliant passing move.

Arsenal couldn't create another goalscoring chance for the rest of the first half, but Mikel Arteta's side showed very few signs of frailties at the other end of the pitch - in part something that was down to Crystal Palace playing with very little intensity. It was much of the same after half-time, but Crystal Palace found themselves back on level terms after

It's so often a criticism of Saturday's opponents, but this time it was Crystal Palace who struggled to get out of first gear and the hosts almost gift-wrapped the opening goal of the match just through their timidity. 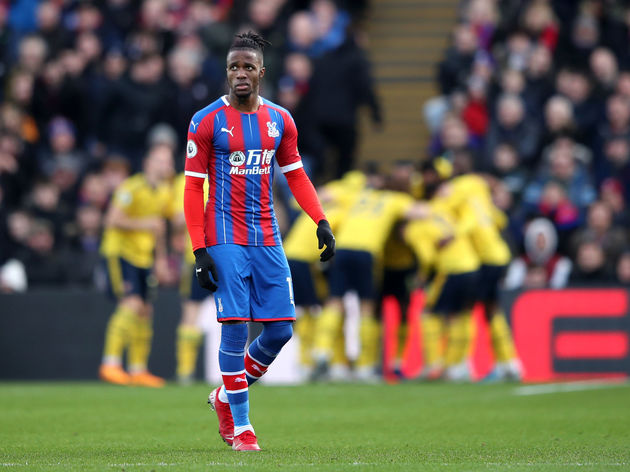 Aubameyang's goal forced Palace out of their shells slightly and they appeared to wake up after half an hour, but through a combination of quality and confidence, one of the Premier League's most error-prone defences weren't put under any sustained pressure.

The game completely turned after half-time, however, as a deflected goal from Jordan Ayew and Aubameyang's red card put Crystal Palace in control of the match and looking the more likely to snatch all three points.

Riedewald better down that left side than Zaha

It was clear from the word go that Arsenal weren't taking three points for granted at Selhurst Park - something that was a crippling weakness under Unai Emery - and while Crystal Palace did everything they could to help the Gunners, their opening goal came thanks to a clear and well-executed game plan. It was a picture-perfect start for Arsenal, but an injury to Lucas Torreira, Crystal Palace's lucky equaliser and Aubameyang's red card turned the game on its head from nowhere.

Arteta's side had their backs against the wall for the remainder of the match and needed to rely on scraps on the counter-attack, but Arsenal were only able to find Crystal Palace's woodwork in their search for a winner against the run of play.

It's Pierre-Emerick Aubameyang, Alexandre Lacazette and

How good is Lucas #Torreira! He's calling all the shots. What a baller. #arsenal #coyg #captain

We cannot, under any circumstances, lose Lucas Torreira.

Lucas Torreira is a beast#CRYARS

After hosting Arsenal, things actually get harder for Crystal Palace next week when they travel to face Pep Guardiola's Manchester City.

For Mikel Arteta and Arsenal, Sheffield United are up next at Emirates Stadium before they look to right some wrongs against Chelsea at Stamford Bridge.