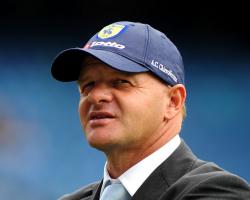 Palermo president Maurizio Zamparini has reportedly claimed Premier League outfits Arsenal and Manchester City are interested in the 21-year-old, along with a number of other clubs

With Palermo having already secured Serie A football for next season, Zamparini has instructed coach Giuseppe Iachini to rest the team's leading scorer to avoid any complications that would affect his sale.

"I have asked Iachini not to play Dybala in these last few games," Zamparini said, according to Italian newspaper La Repubblica.

"It's possible that in the next eight to 10 days we will sell the player, and I want to avoid injuries in this very delicate phase.

"There is strong interest in him

"Meanwhile, in Europe there's Paris St Germain and Arsenal, as well as Manchester City who would like to try and get him but must sell first for Financial Fair Play."

Palermo are ready to cash in on Dybala after the South American turned down a three-year contract extension in January.

Dybala, who moved to Palermo in 2012 from home club Instituto, has scored 13 goals and set up 10 more in 34 league appearances to ensure the Sicilian outfit will be in Italy's top flight for a second straight season.