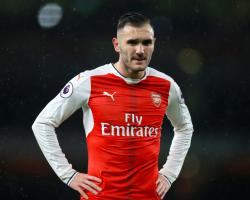 The 28-year-old has started just eight games in all competitions for the Gunners this season having signed from Deportivo La Caruna in August.

Perez was originally offered to Arsenal earlier in the off-season but manager Arsene Wenger resisted as he was hopeful of landing Leicester and England man Jamie Vardy instead.

Vardy opted to remain at the King Power Stadium so a move for Perez, who registered 17 LaLiga goals last term, was resurrected.

But despite spending a reported ÃÂ£17million, Wenger has limited Perez's appearances and the Spaniard has played a largely peripheral role in the squad

Reports he will therefore look to leave the Emirates Stadium at the end of the campaign are wide of the mark however, according to agent Rodrigo Fernandez Lovelle, who had been quoted on an Italian website declaring such intentions.

"Like any professional, he wants to play," Lovelle told Press Association Sport when asked about Perez's future.

No-one has spoken of a move."

Perez, nursing a minor hamstring injury of late, has been a victim of the fine early season form of Alexis Sanchez, who was shifted into a central role at the start of the campaign

Olivier Giroud was also enjoying a purple patch when reinstated to the side, meaning Perez was limited to largely cameo appearances

He did, however, hit a Champions League hat-trick in Basle and has impressed a large section of Arsenal fans when afforded time on the pitch.