Perez happy to be finding his feet at Arsenal 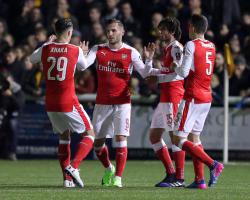 Perez took his tally for the Gunners to seven with the opening goal in the 2-0 FA Cup fifth-round win at Sutton on Monday night.

The start at Gander Green Lane was, however, just his ninth in all competitions.

Perez's representative has played down suggestions the forward - signed for ÃÂ£17million from Deportivo La Coruna at the end of August - may consider his long-term future in the summer.

Arsenal manager Arsene Wenger accepts Perez is now very much "pushing on the door" for a regular starting place, with the 28-year-old having settled into London life.

Perez said in an interview with Arsenal Player: "It was still quite a change for me to get used to the English league when I moved here from Spain

Everyone needs some time to adjust.

"Players are all different, so some take longer to adapt than others

"Now I feel really comfortable and I've fitted in well to the team - that's particularly important for a player."

Arsenal do not play again until March 4 when they head to Liverpool, with the second leg of their Champions League round-of-16 clash against Bayern Munich following three days later

Centre-back Laurent Koscielny is expected to resume training following a hamstring injury which forced him off in Munich, while winger Alex Iwobi should also be in contention, despite taking a heavy knock to his foot after being on the end of a hefty challenge from Sutton captain Jamie Collins

Mohamed Elneny, just back from international duty with Egypt at the African Nations Cup, is to be assessed on an ankle problem picked up on Monday evening

Midfielder Aaron Ramsey could return to the squad for the Anfield trip, having been out since the home defeat by Watford on January 31 because of a calf problem

With no match to prepare for this weekend, as scheduled opponents Southampton take on Manchester United in the EFL Cup final at Wembley, Wenger gave some of the squad extra time off

Mesut Ozil did not feature in the squad at Sutton, with the playmaker having spent some time back in Germany, but he is not anticipated to be a fitness doubt for the Liverpool match