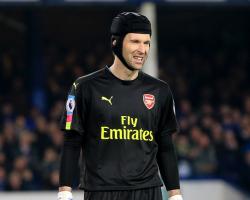 Arsenal ruined Paul Clement's first league game in charge of Swansea as a first-half struggle turned into a second-half stroll.

Olivier Giroud put Arsenal ahead at the end of an even first period, the in-form France striker turning an ankle in the process which later forced him to limp off

Own goals from J ack Cork and Kyle Naughton - both deflections from Alex Iwobi shots - and an Alexis Sanchez volley saw Arsenal coast home, and goalkeeper Cech felt the most pleasing aspect of the victory was the way Arsenal pressed for more goals after going 2-0 ahead

"Every time you can score more goals you should try to do so," Cech said

"That is because every goal will be important when you see how tight it is in the top five places.

"Every goal might count so we try to make sure, when we can, to continue to search for more goals.

The Chilean kicked one of his gloves away as he made it to the dug-out, with England striker Danny Welbeck given his first taste of league action since last May following a knee cartilage problem.

But Cech was more focused on Arsenal ending their away day blues after defeats at Everton and Manchester City, and a draw at Bournemouth, in the Gunners' last three games on the road.

"Our away form was brilliant at the start of the season - or most of the time," Cech said.

But we gave the right answer here that it doesn't matter.

"You have to carry on, get ready and there are a lot of games to be played.

"We have to play everybody who is around us, so we can take points from them

So we are in a good position."

This was another sobering afternoon for a Swansea side who dropped to bottom spot after Clement was introduced to the Liberty Stadium crowd for the first time.

Swansea have conceded at least three goals in seven of their last nine games, and the league's worst defence has now yielded 49 in 21 games

"But I was most disappointed with our offensive play, we didn't show any real quality in the attacking third

"This is a team over recent weeks which has had some crushing defeats, goals have gone in and the players are all human beings.

"Confidence can be affected and my job is to try and get them as well prepared as possible."