Petr Cech wants Arsenal to respond to their defeat to Chelsea 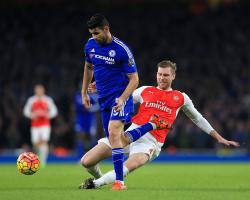 The Gunners had Per Mertesacker sent off after 18 minutes and Diego Costa scored the decisive goal in Sunday's 1-0 win for Chelsea, which leaves Arsene Wenger's men three points behind leaders Leicester with 15 games to go.

The Gunners play Burnley at the Emirates Stadium on Saturday.

But the next two home Premier League matches will be a further test of their title credentials, against Southampton and Leicester

Arsenal are bidding for a first championship since 2004.

"We are only three points off the lead and have Leicester and Southampton at home coming up," Cech said on arsenal.com.

"They are difficult games but if we can keep winning our games, we can go back to the top."

Arsenal beat Chelsea in August's Community Shield, but are without a league win against their rivals in nine games, since October 2011.

Midfielder Mathieu Flamini added: "We are fighting for the title and it is frustrating.

"We gave it everything and it was not easy against 11 men, but what can I say?

It is only a game but (losing to Chelsea) is frustrating and a disappointment."

Arsenal are without a league goal against Chelsea in more than nine hours, since Theo Walcott's strike in defeat at Stamford Bridge in January 2013.

Flamini had a fine opportunity in the first half, but rather than head it, he tried to acrobatically divert the ball in.

He added: "I thought I could take it with one touch but it was going very quickly so it was hard."

Wenger clung to the positives of the performance, although he admitted it would be difficult to raise spirits after the loss.

Wenger told Arsenal Player: "We had such a high expectation level and to lose a game the way we did it it's really frustrating and difficult to accept.

I was very disappointed.

"In recent games we lost we had really hard decisions against us, against Southampton and (against Chelsea).

"We had a good attitude, a fantastic spirit

Despite a result that is negative, I think we should come out with even more belief."