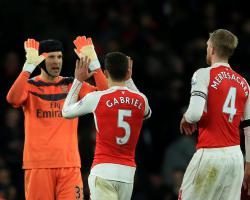 A hard fought 1-0 win over Newcastle United at home is perhaps not the most impressive of results, especially for a team at the summit of the Premier League

In recent times they have been far too prone to letting a good start slip away or allowing one defeat to spiral into three, four or five loses

So what has changed for Arsenal? Mesut Ozil is beginning to dictate play and is justifying his ÃÂ£42.5 million price tag while the Arsene Wenger seems to have found a deeper midfielder partnership that he trusts in Santi Cazorla and Francis Coquelin who, before their injuries, seemed to have found a balance between creativity and defensive intelligence

However there is only one real difference in the team from this year and last year and that is the goalkeeper.

Touted as a potential target for all of Real Madrid, Paris Saint-Germain and Manchester United while Chelsea and then manager Jose Mourinho were adamant they did not want Cech to leave, it was a summer filled with speculation for the veteran goalkeeper

However on June 29th he made the move across London changing from blue to red.

With the exception of the opening day 2-0 defeat against West Ham for which Cech was at fault for both goals, the goalkeeper has been in fine form for his new employers

In particular, Cech played a pivotal role in securing a point for Arsenal in the goalless draw against Liverpool where he made several superb saves including pushing Philippe CoutinhoÃâs drive onto the post and to somehow keep out Christian Benteke from point blank range

Things are different at Arsenal now though

Crosses are expected to be collected, tame shots held and fierce drives pushed around the post to safety

While SzczÃ â ¢sny and Ospina had the ability to make superb saves, they were unable to do it consistently and the only consistency they were prone to was errors not akin to a top quality goalkeeper

While Cech is not quiet as prolific aerial as the likes of Thibaut Courtois or Manuel Neuer, he is still far superior to the likes of Ospina and SzczÃ â ¢sny.

Cech has been a part of the title winning saunters where all the work is done come the final weeks of the season, he has been part of the title races which have been hard fought and he has also been part of a team which has recovered from difficult situations and defeats quickly where, in comparison, Arsenal have let their defeats snowball in recent seasons

While he did not make any show stopping saves to deny the Magpies, he was solid throughout the entire game which has been a constant of his Arsenal career

Where Arsenal goalkeepers of the past may have flapped at crosses in the game thus bringing unnecessary panic to the Arsenal defence or they may have let the two one-on-ones which Cech kept out creep under them, their current goalkeeper was in the business of doing the simple things well in a game which required just that.

With the likes of Mesut Ozil seemingly assisting at will, Olivier Giroud justifying his starting berth and the electric Alexis Sanchez still to return it could truly be ArsenalÃâs year to win the title

They have then been guilty of leaving themselves too much to do in the latter stages of the season where they invariably mount a winning run which, had they been near the summit at Christmas, would surely have culminated in them being crowned champions at the end of the season

Cech will want to continue to build upon his clean sheets record and if he is able to do so this season then it will take a brave man to bet against Arsenal and who knows, Cech could win the title with two different teams in consecutive seasons

If they were to win it would go down as, alongside winning the Champions League trophy in 2012, his biggest achievement as, personnel wise, nothing has changed between this season and last season except for the goalkeeper

If he is able to do that then he would surely be regarded as one of the greatest goalkeepers of not just the Premier League era, but of all time.