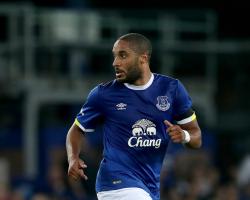 The Wales skipper made his first Premier League start since his summer move from Swansea in the 1-0 victory over Stoke, securing back-to-back-clean sheets after playing in the EFL Cup win over League Two in midweek.

It is still early days but the 32-year-old has brought an assuredness to a backline which conceded 55 goals last season under Roberto Martinez, 30 of which came at home, as they threw away leads with alarming regularity.

"He has only played two games but on paper two clean sheets," said Jagielka.

"It is nice to have another voice out there

We are quite a quiet team.

"He captains his country, he captained his previous team so it is nice to have players on the pitch who aren't scared to help their team-mates out.

"It makes your own job easier.

"Ash has played in a lot of divisions, played a lot of games and the experience and composure he has brought in the last couple of games puts us in good stead."

Williams has played only 99 minutes of the season so far so he cannot entirely take credit for Everton's best start to a campaign since 2006, with seven points from a possible nine.

Manager Ronald Koeman is intent on making his new side more resilient and that was evident in the win over Stoke, where Shay Given's own goal came via Leighton Baines' penalty, a post and the back of the goalkeeper's head.

The award of the spot-kick was dubious, with Williams falling in what appeared an accidental tangle with Phil Bardsley, but the way Everton closed out three points was not.

"I don't think we are playing the ball around as much as we did in our own half but we are still playing decent football," said Jagielka of the changes introduced by Koeman.

"We have some talented players going forward

Spurs, West Brom and Stoke have given us three different types of tests but I think we have stood up to it quite well.

"I think we could have had more goals and we've ridden our luck a couple of times.

"There has not been a tremendous amount of difference but we have only been together for eight or nine weeks and a few players have come a bit later but it is exciting times ahead."

Stoke boss Mark Hughes was angry as, for the second week running, his side were penalised as a result of the new interpretation on holding in the penalty area.

"There has to be that consistency

That is the key word," he said.

"If that is how games are going to be refereed, we accept that but it has to be across the board.

"I am sure there will be many incidents like this one or last week's."

England manager Sam Allardyce was at Goodison Park to cast an eye over a number of players ahead of his Sunday evening squad announcement.

Toffees midfielder Ross Barkley will more than likely be in the squad but for the likes of Leighton Baines and Jagielka, who missed out on Euro 2016, and even Stoke's Ryan Shawcross who impressed again, selection is less certain.

"There's a new manager but I can't imagine my age will do me any favours getting into the England squad," said the 34-year-old Jagielka.

"If I don't get in it will benefit me Everton-wise and if I do it will be fantastic as I love playing for my country.

"I don't want to stop playing for my country yet but it might be out of my hands.

"I'll just keep doing my stuff for Everton and I'll either turn up here for training on Monday or turn up for international duty."