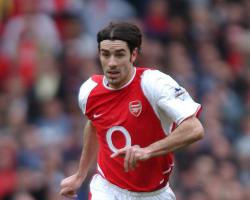 The pressure will all be on the Gunners when they tackle Hull at Wembley on Saturday afternoon, with them desperate to avoid ending another promising campaign empty handed.

Pires - who won the Premier League twice and three FA Cup finals as Wenger's side swept all before them at the turn of the Millennium - feels the current squad can only get better once they have proven themselves as winners.

"For the fans, for the club, for the board, for Arsene Wenger, the final is very important," said the 40-year-old French World Cup winner.

"It is very important psychologically because every player knows it is very hard to win any title, especially after a long time.

"Everybody at Arsenal knows big pressure is on the shoulders of the players because we need to win, to concentrate and focus.

"But they must keep focused on the final, it is not an easy game.

"We won 3-0 (at Hull) a few weeks ago, but the Premier League and FA Cup final is totally different."

Pires took time to settle into life at Arsenal after a ?6million move from Marseille in 2000, but the following season would be voted the Football Writers Association Footballer of the Year for 2001/2002.

Parallels are often drawn with Mesut Ozil, who has at times struggled for consistency following a club-record ?42.5million move on deadline day last September.

Pires, though, feels Ozil will now have become accustomed to the hustle-and-bustle of top-flight football in England, which is unlike any other league.

He is a very good player, with quality," Pires said.

"When you come to England, it is very difficult because the football is completely different.

"For me, it was very difficult for six or seven months

When I see Mesut, I say he has had a good first Premier League season, and next season, he will be much better.

"After six or seven months, it gets easier."

Pires left Arsenal on a free transfer to Villarreal in the summer of 2006, and then had a brief spell at Aston Villa under Gerard Houllier three years ago.

The Frenchman retains close links with the Gunners, and, like Thierry Henry, trained there towards the end of last season as he looked to maintain fitness levels.

Wenger has yet to sign a new contract for next season, but is expected to stay at Emirates Stadium, having safely taken the club back into the Champions League qualifiers once again after securing fourth place in the Barclays Premier League ahead of Everton.

Sometimes you need to take your time over a decision

He knows Arsenal, the team, the squad, all the players

He knows he has very good quality," Pires said.

"I think he will stay

If he wins the FA Cup, it's very good for him and for the spirit and the minds of all the players

I think he will stay for the next season."

Moving into the dugout is a role which eventually Pires would like to take on once he has finally finished playing, having been linked with a switch to the A-League in Australia.

He said: "Maybe one day, but for the moment I am coaching my two sons