Pires- Its Gunner be difficult 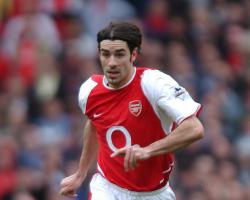 The current Gunners side lay sixth in the table on Sunday morning after their 2-2 draw against Hull the previous day, 11 points off the pace set by Chelsea, who remain on course to go unbeaten all season too, albeit with 30 games still to go

When asked if Arsenal could win the Premier League title this season, Pires told Press Association Sport: "It's very difficult

"The current squad lacks the physical power the Invincibles team had in players like Sol Campbell, (Patrick) Vieira, Gilberto Silva and Thierry Henry.

"But in football, everything is possible

They have (the points gap) with Chelsea, but we can still win the league."

Pires, who left Arsenal in 2006, is currently playing with FC Goa in the Indian Super League - his first game with the club ended in a 2-1 defeat.

However, it is a world apart from the pressures Arsene Wenger is under at the moment, as Arsenal gave away a first-half lead to Hull and then had to rely on a Danny Welbeck stoppage-time equaliser.

This season promises to be an even tougher test to 2013-14, when Wenger overcame severe criticism over his big-money signings and tactics to win the FA Cup and end a nine-year trophy drought.

Wenger recently celebrated 18 years with Arsenal, a testament to the club's support, and Pires wants the fans to continue doing so as well, saying: "I understand that the fans want to win the trophy.

"But do not forget that Wenger built the Arsenal team.

"Of course, it is important to win the title

But I always believe in Wenger and in the team.

But I think the fans should trust him and believe in him."

The faith for Wenger comes on both a footballing and a personal level for Pires, even if he does not consider himself worthy of following in Wenger's managerial footsteps just yet.

"When the offer from ISL came forward I consulted with him, I explained to him the concept

If you are confident to play don't wait

"The job of a manager is very difficult

It's a tough job

At this point of time I don't think I'm ready to take up that role, maybe later sometime I might.

"Football is my passion and I can still play, so I decided to come back to playing football.

"If you have the passion, you need to play

Whether it's Arsenal or FC Goa, I am always up for a challenge."