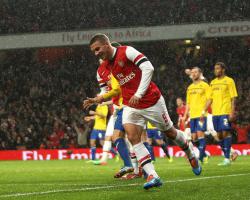 The German international netted a brace in the 4-0 victory over Sky Bet League One side Coventry in the FA Cup fourth round at the Emirates Stadium on Friday night.

It has taken the 28-year-old some time to recover full match sharpness since returning from a hamstring injury which sidelined him for four months.

Podolski, though, hopes he can now step things up a level to help drive the Barclays Premier League leaders on towards a successful end to the campaign.

"It was a long time for me because I never had a long injury before," Podolski told Arsenal Player.

"It was not easy. You work hard, you train hard and finally you're back.

Podolski added: "You are always happy when you play and score goals for the team, so it was good for me, good for the team and important in the end we did the job to be in the next round."

By the time Arsenal are next in FA Cup action, their squad could well have been boosted by the arrival of yet another German, with growing reports suggesting wheels are in motion to bring Julian Draxler from Schalke, despite Gunners manager Arsene Wenger having played down speculation of a ?35million deal as an "illusion" in his post-match media conference on Friday evening.

For the short-term, though, Wenger will focus on the players already embedded within his squad.

Midfielder Alex Oxlade-Chamberlain was also back in the starting XI against Coventry following his own long lay-off after suffering a serious knee injury on the first day of the season.

The 20-year-old came through 71 minutes, having made his return as a late substitute against Fulham last weekend.

The combative midfielder hopes he can now push on for the rest of the campaign, which could end with a place in England's World Cup squad.

"I am not match fit yet and in the second half that showed a little bit in my performance, but that will come," he said on the club's official website.

"That's a stepping stone in the right direction for me and with a few more starts I should be back to match fitness."

Arsenal were never really in danger of facing an upset once they had gone ahead through Podolski's neat angled finish on 15 minutes, which was doubled before half-time with a back-post header.

Substitutes Olivier Giroud and Santi Cazorla both struck late on to wrap up the tie.

Coventry goalkeeper Joe Murphy feels the Sky Blues showed plenty of spirit, albeit without any reward, cheered on by some 5,000-strong travelling fans who staged protests against the Midlands club's switch of 'home' matches to Northampton.

Striker Leon Clarke - who has handed in a transfer request amid reports of interest from Wolves - missed two good openings in the second half while an early 20-yard drive from captain Carl Baker had been tipped over by Lukasz Fabianski.

Murphy said on the club's official website, www.ccfc.co.uk: "We made it competitive and it was a shame to concede two goals in the first half as it could have been a different game.

"Hopefully, we can learn from the experience and now that we are out of the cup, we can concentrate on the league."