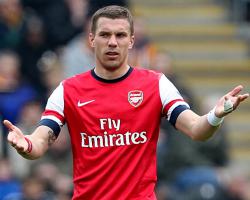 The Gunners signed off with a 2-0 win over Norwich, which confirmed relegation for the Norfolk club, to end their campaign just seven points behind champions Manchester City.

Arsenal had led the table for some 128 days before falling away in mid-February following the loss of key men to injury - notably Aaron Ramsey, who scored a fine goal at Carrow Road - and then rallying to end with five straight wins after beating Wigan on penalties to book their place in the FA Cup final.

Podolski accepts if Arsene Wenger's squad are to close that gap over the next 12 months, then they cannot afford to be second best when they line up against City, Liverpool and Chelsea again, having suffered heavy away defeats at all three.

"It is not easy to [look back on the season finishing fourth] when you are on top of the league for weeks and weeks," said the Germany international.

"But we lost against the clubs around us to Man City, Liverpool and Chelsea and these are the points we miss

Next season we must now focus as well on big games."

Podolski continued: "Now we have to focus on the FA Cup final and after the season, the boss and the staff will look at the matches and what was good and what was not so good.

"We will see and we must change that next season, but it is not easy.

"This is the Premier League, which is not like other leagues

Every year, you have six or seven teams who fight to be champions and as well the teams who are at the bottom fight every game.

"But I think we played well in the season and if we can win the FA Cup final, then it is a good season for us."

Ramsey's moment of brilliance, volleying home a floated cross from Olivier Giroud at the far post, finally broke the deadlock at Carrow Road after John Ruddy had made some decent first-half saves.

The Wales midfielder hopes Arsenal can carry their recent momentum into the FA Cup final against Hull, which will offer England midfielder Jack Wilshere the chance of another run-out, having made a welcome return from a fractured foot with a substitute's appearance on Sunday.

It was important to win before we go into the FA Cup final," Ramsey said.

"[Everyone] wants to play in finals and we have one now, so I am looking forward to that.

"We haven't won anything for many years now so this would be a great trophy to win and I am sure that if we do win it, it will make us more hungry to go on, get to more finals and win more trophies."

Full-back Carl Jenkinson added a second for Arsenal when he swept the ball in from close range - before wheeling away in delight to celebrate his first club goal in front of the travelling support in what was a special moment for the life-long Gunners fan.

"As a kid, I have scored that goal 100 times in my back garden and celebrated like I am celebrating in front of the fans

I have done it for real now and it was the best feeling in the world," Jenkinson said on Arsenal Player.

"I am a defender so I am not going to score too many goals and hopefully that will kick-start it now and I will get a few more."