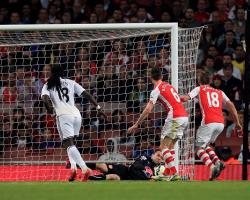 Arsenal dominated the game at the Emirates Stadium and created a number of excellent chances in the second half but it was the visitors who grabbed a late winner after Bafetimbi Gomis' 85th-minute header was ruled to have crossed the line by the goal decision system.

It was one of only three efforts on target from the visitors on the night, in comparison to Arsenal's nine, and Wenger was frustrated by his opponents' defensive approach.

"We were unlucky I think against a team who refused to play completely and just defended," Wenger said.

"In the last two home games we didn't score and that was frustrating when you have so much of the ball and play with such accuracy around the box.

They came just to defend with four defenders and six midfielders, and they defended

"If you win, you're fantastic but if you lose people say to you, 'why did you not play?'

They won so they are fantastic."

Olivier Giroud, Theo Walcott and Aaron Ramsey all squandered opportunities to put Arsenal in front while Alexis Sanchez had the best chance of the game at 0-0, but could only find Lukasz Fabianski from seven yards out.

"We rushed our finishing," Wenger said

"Sometimes we were maybe too eager to finish alone rather than passing the ball.

"Sometimes we had to force the situation and in the end you have to give them credit - they defended well."

The defeat means Arsenal miss the chance to move level on points with Manchester City in second.

Wenger's side still have a game in hand over both City, who they trail by three points, and Manchester United, who they lead by two and face at Old Trafford on Sunday.

"It's very important to finish in the top three," Wenger added.

"We still have a game in hand

That is the most important thing."

Swansea's victory is their third in a row in the league and manager Monk brushed off Wenger's assessment of his side's performance, insisting his players adapted well to the opposition.

"We could have come here and gone toe to toe but with the individual quality that Arsenal have, they could have maybe hurt us

We set up well with a game plan."

Monk added: "Of course it was going to be difficult, but we've done it all season.

"The idea was to get to the last 20 minutes still in the game, make the substitutions and hope we could get the goal on the breakaway, which proved to be the case.

"If we didn't play, I don't know how we got three points."

Swansea remain eighth but closed the gap on the Europa League qualification spots with sixth-placed Tottenham only two points ahead now in the table.

Southampton are just one point clear in seventh, which would be enough for a European spot if Arsenal beat Aston Villa in the FA Cup final.

The perils of playing Europa League football on Thursday nights are known to have a negative effect on teams' league form and Monk was less than enthusiastic when asked about the prospect of playing in the competition.

"The only thing that will change if we get there will be the planning in terms of recruitment in the summer, not that the chairman will want to hear that.

"I don't lie in bed at night worrying about it."