As per, there's plenty of football to get excited about this weekend.

Anywho, it's time for 90min's predictions for the weekend's games, so let's get into it. Much of this week in Spurs' bubble has been spent debating whether Jose Mourinho was right to set up in pragmatic fashion against Liverpool (spoiler: he was).

However, now it's about evolving their style in games where they are supposed to be the protagonists, which they have faltered with as of late - draws with Norwich and Middlesbrough were uninspiring, and let's not even get started with what happened at Southampton.

Watford have been enjoying a new manager bounce under Nigel Pearson, and a side that was seen as all but relegated are now suddenly optimistic about their chances of survival.

12.30 kick off and another 'tough place to go' for Spurs? The Hornets should prevail here. This is probably the 3PM game to keep track of on Saturday. ​Arse​nal, playing better football but still a bit soft under new manager Mikel Arteta, against Sheffield United, whose own boss Chris Wilder pretty much ruled 2019.

The Gunners will be Pierre-Emerick Aubameyang-less against a side currently four points and four places higher than then in the Premier League, with the striker's absence definitely making the contest a really tricky one to call.

The Blades beat Arsenal in the reverse fixture earlier this season and will certainly fancy their chances of leaving the Emirates with a point, or maybe even three. It took a while, but ​Real are back!

Zidane added another trophy to his collection with Los Blancos' Supercopa de Espana triumph - fascinatingly won despite Real winning neither La Liga or the Copa del Rey last season. How did that happen?!

Anyway, the Bernabeu is set for an intriguing clash when Sevilla roll into town, with the visitors having the chance to cut the gap between the two teams to just two points in the title race.

However, the hosts ought to have too much for 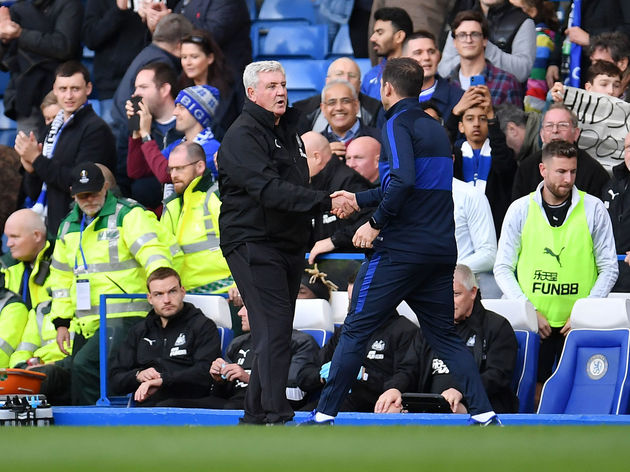 One of the Premier League's most established managers takes on one of the new breed this weekend at St James' Park, in what's usually a closely contested game between Newcastle and Chelsea.

Steve Bruce's Magpies have defied many of their pre-season critics, despite their goalscoring struggles up front - and in Miguel Almiron, they have one of the Premier League's most in-form players.

Similarly, you never know what you're really going to get with Chelsea under Frank Lampard. His youthful brigade are often dazzling but they've had plenty of off days thrown into the mix this season. A place in the top four is in their hands now, but this could be another bump in the road. By ​Ross Kennerley (this week's substitute for Jack Gallagher)

Is Die Roten's stranglehold on the Bundesliga finally slipping?

Bayern Munich have recovered from a rocky spell to win their last three on the bounce but will need to maintain that pressure if they are to stand a chance of keeping up with the top two.

The fact that Robert Lewandowski has been deemed fit for the clash is a major boost as he's only three goals shy of Hertha's entire total for the season.

Can Jürgen Klinsmann's side contend with the Pole? No, no they can't. They've got a decent defensive record but there is simply no stopping him and the rest of this Bayern attack on Sunday. By ​Robbie Copeland (this week's substitute for Krishan Davis)

Stretching back to the start of the 2016/17 season, Liverpool have won just one game against Manchester United; drawing five and losing the other. It doesn't seem to matter how well they are playing or how the form table looks, it's always a tough game when United come to town.

But even with all that in mind, at the 1-1 draw at Old Trafford in October still reasonably fresh in the memory, it really is difficult to look past a Liverpool win. They have lost once in the 59 matches since the beginning of last season, and that hard-fought draw in Manchester is the only time in 21 games they have dropped points this season.

It won't be easy, but a trademark of this Liverpool team is having just enough to win no matter what the circumstances. That seems unlikely to change here, even if the game isn't one for the neutral spectators. Juventus remain in brilliant form, with just the one Serie A loss from their 19 games. They may find themselves second by the time Sunday evening comes around, given that Inter face Lecce earlier that day.

However, while Parma are having a decent season by their own standards - sitting seventh in Italy's top flight - don't expect La Vecchia Signora to slip up. It's Quique Setien season, and we're absolutely here for it. While Scott clearly remembers his first season at Betis well, where goals flowed like runs from the bat of Benjamin A. Stokes OBE, that's probably not the energy he's going to bring to Barcelona. The second season was stodgier, and a little more pragmatic in terms of the balance between defence and attack.

Change will come more in increments than in one great wave, so don't expect a functionally fine Granada side to be offered chances like after-dinner mints. On the other hand, there's no Luis Suarez and no true number 9 to back him up, so gamblers might look to take the under for goals scored.