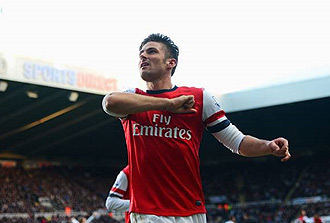 How will they fair this time around at the Emirates?

Arsenal are once again top of the Premier League, accruing 48 points through 21 games.  A win against Aston Villa on Monday night sent them to the top but it was a shaky second half for the Gunners, who held on with Giroud making a big return by scoring his 9th goal of the campaign and Jack Wilshere adding another goal and assist.

Fulham are fighting to stay out of the relegation zone so far this season, totaling 19 points, 3 points from their last 3 games.  2 out of their last 3 Premier League games, Fulham have allowed 11 goals (6-0 loss to Hull and 4-1 loss to Sunderland) and only scored 3.  Arsenal have been stout on defense this season and it will be difficult for Fulham to score with their current trend.

It hasn’t been too busy for both clubs during the January transfer window, with some rumors about some players heading to Arsenal and Fulham acquiring Clint Dempsey from Seattle FC on loan.  Clint Dempsey had a successful spell at Fulham which got him a move to Tottenham, but see the success there that he had at Fulham.  Fulham are optimistic that he will continue on his good form he had at Fulham two years ago and they need it.

Injuries have haunted Arsenal all season and they may have lost another player in Rosicky after Monday’s win at Villa Park.  Rosicky underwent nose surgery to repair two broken bones but manager Arsene Wenger says it’s doubtful, but possible that he could play with a mask.  Nacho Monreal is also doubtful with a knee injury.  Vermaelen, Ramsey, and Arteta are also out for this game and likely out, according to Wenger, for the game against Coventry City in the FA cup.  Theo Walcott also underwent his knee surgery and will now take the time he needs to recover.  The goal is to be fit enough for the 2014 World Cup in Brazil come June.

Arsene Wenger acknowledged the fact that his team needs to take advantage of earning the necessary points against the lower clubs when they can.  The top of the table is so close and Arsenal needs to earn every point they can.

Kickoff will be Saturday, 10AM ET, at Emirates Stadium.