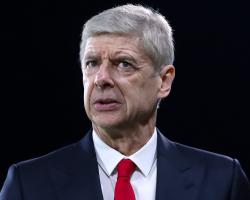 Van Basten's ideas include getting rid of the offside rule, replacing penalty shoot-outs with eight-second run-ups and introducing orange cards to send players to sin-bins for 10 minutes

He has also proposed that players should be involved in fewer matches each season, that games should go straight to penalties without extra-time, children's games to be limited to eight-a-side, stopping the clock every time the ball goes out in the last 10 minutes and only allowing captains to speak to referees.

Wenger said: "Changing in itself is not a good quality, improving is the real target

Some of the proposals are worth discussing, some I don't see any big interest.

"The one I don't find interesting is to suppress offside

Offside is what makes the team good together

It is an intelligent rule as well, it is important to keep that in the game.

"Overall football improves, people say it is too tight and compact but football has always been like that, defence creates a problem for the attack and the attack find a solution."

But Wenger did agree with Van Basten's proposal about captains and referees, although feels it would be difficult to implement

He added: "It is a very good proposal, we all dream of that, but it never happens in our sport."

West Ham boss Slaven Bilic was also doubtful whether getting rid of the offside rule would work.

"For me the major one is offside," he said.

"I can't imagine what football would look like, but my first reaction is it's impossible

I really don't know, maybe to try it and see it on a pitch or organise a game.

The Tottenham manager said: "I understand that sometimes when you are in some position you need to try to find ideas, but I don't want a machine without offside

"If we play without rules, we have to be careful with that

I read some sentences but I don't know

"My first impression I think is, be careful

Because in football to change the rules is a very difficult thing."

Van Basten has said he wants to listen to views on his proposals before anything is put before the International Football Association Board (IFAB), the game's lawmakers.