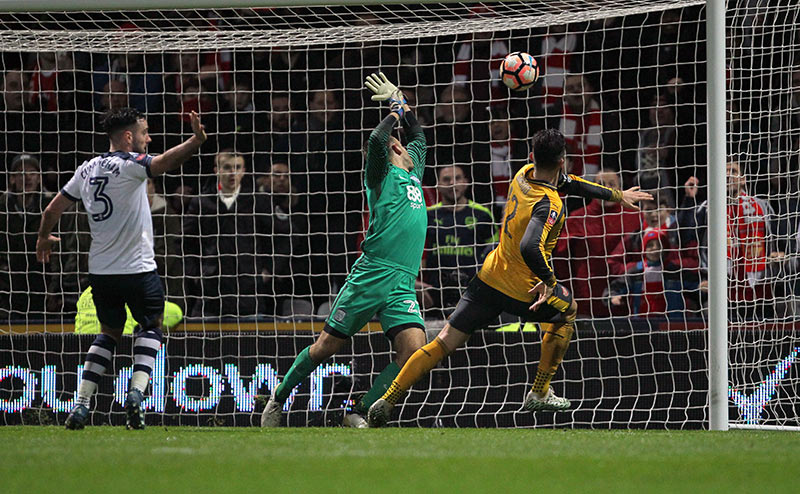 A game of two halves - rubbish first half and slightly less rubbish in the second.

This was typical Arsenal - Start the game as if we couldn't give a shit, and go a goal behind to a side who could clearly see that we weren't up to much - 'Southern softies'.

As the players tropped off at half time it was hard to see how we could win the game, but thankfully a superb strike from Ramsey put us level. We could kick on from here I thought.

We did - sort of - but continued to give the ball away continually, and failed to make the most of our chances. defensively we were comical at times. Mustafi is just returning from injury, but he looked dodgy today - He needs a few games next to Koscielny to get his mojo back.

Once again Giroud got the crucial goal, from a superb touch by Perez.

We got out of jail, but looked far from convincing.

Olivier Giroud scrambled a late winner as Arsenal came from behind to survive an FA Cup scare with a 2-1 win at Championship Preston.

The Gunners were fortunate not to trail by more than Callum Robinson's early strike at half-time after being run ragged by the fired-up hosts at Deepdale.

Aaron Ramsey equalised soon after the restart and Arsene Wenger's side, much improved in the second half, snatched victory when Giroud claimed his fourth goal in four games in the 89th minute.

The result meant Wenger maintained his proud record of having never lost a third-round tie, but not without a huge sigh of relief.

The cup winners of 2014 and 2015 opted to rest the likes of Alexis Sanchez, Petr Cech, Laurent Koscielny and Hector Bellerin, while Mesut Ozil was not fit to return.

Those absences almost cost them as, for half an hour, Preston were sensational - and they needed just seven minutes to take the lead.

Aiden McGeady, on loan from Everton, was outstanding and his running and combinations with forwards Robinson and Jordan Hugill continually troubled the Gunners.

Robinson had already had one shot blocked when he was played into space to tuck away the opener after a brilliant spin by McGeady.

McGeady was involved again before Robinson fed Hugill and got on the end of a return cross only for Shkodran Mustafi to block on the line.

Robinson then turned provider as he got behind the defence but Hugill could not get a touch to his low cross.

Daniel Johnson also missed the target from distance and Robinson had a header disallowed for a foul on the goalkeeper.

Wenger looked very unhappy on the touchline and it was not until the latter stages of the first half his side began to threaten.

Even then Giroud hesitated and chipped an effort across goal when he might have opted for power while Ramsey could only head straight at Chris Maxwell.

It was a foretaste of what was to come after the break, however, as Arsenal returned with much more urgency.

Within a minute of the restart the Gunners were level, Preston struggling to get a touch as Alex Iwobi held off challenges on the edge of the box and laid off for Ramsey to strike.

From there Arsenal began to play with more purpose and dictate the tempo - but Preston proved obstinate.

As the second half wore on, the contest became scrappy with referee Robert Madley called into action much more

Madley even had to rebuke Preston boss Simon Grayson after he took exception to a decision to book Greg Cunningham for a challenge on Lucas Perez.

Preston survived a couple of scares as Maxwell parried an effort from Mustafi and Giroud was flagged offside after volleying in.

It seemed the hosts might hang on for a replay - but their hopes were dashed when Giroud's close-range shot was deflected in from a Perez backheel.

Danny Welbeck, on in the latter stages for his first appearance of the season, almost added a flattering third but Maxwell saved.