​You can laugh, but as an Arsenal supporter, that record was all that fans had left this season.

Battered in Europe, bruised in England and belittled by the world. This season is the lowest of lows.

If, as a football fan, you were happy only when your team did well, you wouldn't be happy too often. Instead, if you're happy when another team does badly, you'll find yourself being distinctly more cheerful.

Which is why it's a sad indictment of ​Arsenal's season that the latter of those joys has been significantly more forthcoming than the former.

That Liverpool result has gone down well in North London...

Boast a confident aura all you want, but genuinely, no messing about, the 'Invincibles' looked under severe threat.

Not just that - because going unbeaten this season looked frighteningly plausible for ​Liverpool - but the manner of their application evoked a fear inside that looked like shattering the achievements of those 34 players, plus and one French genius.

The whole situation was demoralising. Not only are Arsenal performing as poorly as most fans had witnessed during their lifetimes, but the topic of so much singing and goading and celebrating and reminiscing looked like going up in smoke.

Liverpool weren't just going to go unbeaten, they were doing so at a canter. Breezing through 90 minutes each and every week, facing bumps and hurdles, but overcoming them with machine-like efficiency. Even when there was most minor of inklings that something could stop them, ​Sadio Mane would rock up in the 999th minute to ensure a point was secured, before ​Mohamed Salah would grab the winner in the 1000th.

It was getting to a point where there was a degree of self-acceptance regarding this campaign. Liverpool were going to go unbeaten and they were going to do so with more panache and points than Arsenal did in 2003/04. Could the season be any worse for Arsenal? Nope, this is an all-time low.

So, when I - just like plenty others who had opted to disregard what went on at Vicarage Road in favour of actually enjoying myself on a Saturday night - chose to check in on the scoreline and witness three ​Watford goals went unanswered, an eruption of emotion ensued.

Understandably, from the outside looking in, this is wholly sad.

Deriving such pleasure from another side's failings just so your team's historic record remains both unmatched and untarnished? Yeah, that happened, and, yeah, it felt bloody magnificent.

Liverpool have been so annoyingly brilliant this season that this never looked possible. The debate is still there - 3-0 defeat to Watford and all - for them to be classed as one of the best sides the ​Premier League has ever seen. And rightly so.

They've dropped just five measly points all season, winning 79 from a possible 84. Figures that are the best we've seen in the top flight. They play exciting football, they win at all costs and the league is theirs this term. Hats off to Jurgen Klopp and the rest of the club. They deserve it. 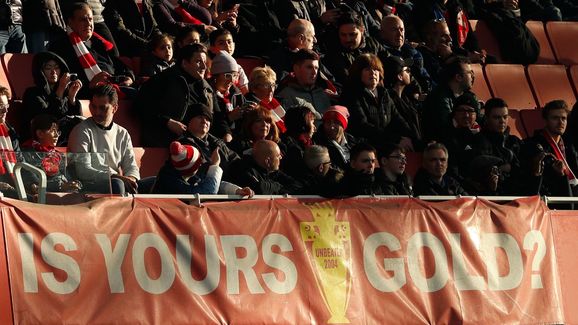 It is testament to how good Liverpool have been this season that they made going unbeaten in the league look like so painfully effortless. A feat that is heralded as one of the greatest of all time was at risk of becoming some bizarre formality under Klopp's tutelage, just another record to tick off their list en route to strolling the Premier League title.

This defeat once more puts it into perspective how magnificent Arsenal's achievement was. Arsene Wenger had the audacity to predict it, but implementing that required levels of mental strength that, as we've now seen, have yet to be replicated.

The Premier League title will comfortably end up in the Anfield trophy cabinet this season, nothing will change that. But the events of February 29, 2020 have succeeded in bringing football crashing back down to earth. Nobody is perfect, and no team is perfect.

Arsenal's 2003/04 team wasn't perfect, but they were pretty damn close. Everyone points to their 12 draws that season, but it's the figure next to that which remains most important: zero losses.

There are simply no words to fully express the magnitude of the accomplishment Wenger's side achieved during that unforgettable 49-game run. Taking into account the fact that it brought with it a league title, no matter how you look upon that sequence of results, or from which side of north London your allegiances lie, it's utterly stupendous in every way.

Will any side in England surpass that feat? As we've seen, it's manageable, but yet, nobody has done it.

Will an unbeaten league run of that stretched to 49 games ever be broken in England? Well, Liverpool's 44 was pretty darn close and winning the league would have made that record null and void.

They were duly labelled the 'Invincibles', and invincible they'll remain. Even if Liverpool followed suit, they wouldn't lose that crown, but it's an honest admission to say it wouldn't be quite as sweet.

But Watford put an end to that. Those wonderful Hornets saved Arsenal's paper thin skin. What minuscule pleasure was left to cling onto from this season remains.