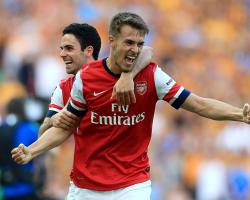 Appearing in their first ever major final, Hull rocked Arsenal by going 2-0 up inside just eight minutes through goals from centre-backs James Chester and Curtis Davies.

But Santi Cazorla's sumptuous free-kick reduced the arrears in the 17th minute and after Laurent Koscielny netted an equaliser with 19 minutes of normal time remaining, Ramsey drilled home the winner in the extra period.

"We have conceded early in lots of big games this season, but we showed great strength of character to come back and to score the winner is something I have dreamed off," Ramsey told ITV.

It was the Welsh midfielder's 16th goal of a campaign that has seen him emerge as Arsenal's most influential player and brought Arsene Wenger's side a first trophy since the 2005 FA Cup.

Wenger, who is still to extend his contract, which expires shortly, has now won five FA Cups, while Arsenal have equalled Manchester United's record of 11 successes in the competition.

"We wanted to make history tonight and win the game and we did that in both ways -- how not to start the cup final and how to come back," said Wenger.

"I've praised the spirit of this team and they showed that today."

Hull faded badly after their stunning start, but Steve Bruce's side could console themselves with the knowledge that a Europa League place was already secure.

Chester had unexpectedly overcome a hamstring problem to take his place in Hull's three-man defence, but nobody could have predicted how quickly he would have an impact on the game at a muggy Wembley Stadium.

Hull's fans were still adjusting to the novelty of seeing their side in an FA Cup final when Chester put them ahead in the fourth minute, clipping the ball into the bottom-left corner from Tom Huddlestone's mishit volley.

Huddlestone had been picked out by Stephen Quinn from a corner and four minutes later, Arsenal were again exposed at a set-piece.

After Ahmed Elmohamady's free-kick was partially cleared, Quinn put the ball into the box from the left and when Alex Bruce's downward header came back off the post, Davies rattled the rebound home from a tight angle.

It might have been 3-0 minutes later, with Kieran Gibbs heading off the line from Bruce, but Cazorla reduced the arrears with a glorious 25-yard free-kick that arced into the top-right corner.

Arsenal continued to force the issue in the second half and had three penalty claims turned down by referee Lee Probert in the space of 10 minutes.

Huddlestone appeared to drag Giroud back with his hand, Arsenal substitute Yaya Sanogo saw a header hit Jake Livermore on the arms and Cazorla was caught by Davies, but Probert allowed play to continue on each occasion.

Amid the flurry of appeals, Koscielny headed wide from a corner, but in the 71st minute the Frenchman found the target.

Cazorla's corner was knocked down at the back post and Koscielny swivelled to hook the ball home from close range despite being flattened by Hull goalkeeper Allan McGregor.

Gibbs then wasted a gilt-edged chance to put Arsenal ahead by blazing over from only six yards after being teed up by Sanogo, before Cazorla was again denied a penalty following a tangle with David Meyler.

Giroud, twice, and Sanogo went close in the closing minutes of normal time and Arsenal's dominance spilled over into extra time, with Giroud heading a cross from Ramsey against the bar.

Wenger introduced Jack Wilshere and Tomas Rosicky at half-time of extra time, but it was Ramsey who made the difference, ghosting onto Giroud's back-heel and bludgeoning a crisp shot into the bottom-right corner.

Arsenal goalkeeper Lukasz Fabianski gave his team's fans one last fright by rushing out of his box and missing the ball, but Hull substitute Sone Aluko's effort from out on the left bounced agonisingly wide.