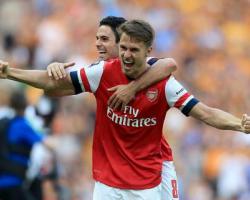 Manager Arsene Wenger confirmed to radio reporters during Tuesday night's World Cup semi-final between Brazil and Germany in Belo Horizonte, where he was working as a pundit for French television, that the Emirates Stadium club were close to a deal for Sanchez.

Sources in Spain now suggest Barcelona have agreed to an improved fee in the region of Â£28million for the 25-year-old, with their main summer transfer target, Liverpool forward Luis Suarez, expected to head to the Nou Camp in the coming days.

Press Association Sport understands constructive talks with Sanchez's representatives are continuing, although any official announcement from Arsenal is not expected until all formal processes have been completed.

Confirmation over Debuchy's Â£10million switch from Newcastle, however, could come sooner, as Arsenal aim to bring in a replacement for Bacary Sagna, who left on a free transfer to Manchester City.

Ramsey, meanwhile, was one of several players not involved in World Cup duty to return for the start of pre-season training at London Colney this week.

The 23-year-old took part in a question and answer session on the official Twitter channel of club sponsor Emirates airline on Wednesday afternoon, and spoke of his determination to build on last season's success

I'm sure we'll give it a good go," said Ramsey, whose goal in extra-time secured a 3-2 win over Hull and ended Arsenal's nine-season trophy drought.

"(I am looking forward to) just getting back into it and playing every week.

While bringing in Sanchez, who also had interest from Liverpool and Juventus, would present something of a personal coup for Wenger - said to have spoken to the player face-to-face while in Brazil - Arsenal also need other reinforcements.

QPR forward Loic Remy, rated at Â£8million, is a potential target, having spent last season on loan at Newcastle, along with Bayer Leverkusen midfielder Lars Bender.

Wenger is set to return to club duties following the World Cup final, when Arsenal will press on with their pre-season plans, which include a trip to New York at the end of the month.

The Gunners will host the Emirates Cup at the start of August, before tackling Premier League champions Manchester City at Wembley in the Community Shield.