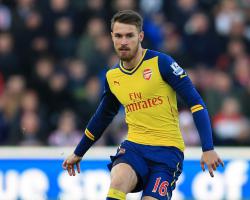 The 23-year-old's sensational long-range half-volley - which was so good it was applauded by the home fans at the Turk Telekom Arena and started debates about great goals on social media - made it 3-0 after half an hour.

Arsene Wenger's men delivered a commanding Tuesday night display in Istanbul with a much-changed side, showing no hangover from Saturday's 3-2 defeat at Stoke, which left them sixth in the Barclays Premier League.

Ramsey's superb effort added to his neat finish inside the area after 11 minutes, and followed Lukas Podolski's earlier opener for the visitors

It proved a popular talking point on Twitter, with Arsenal forward Yaya Sanogo looking flabbergasted after the ball flew into the top corner

At the other end of the pitch, goalkeeper Wojciech Szczesny put his head in his hands in disbelief at what he had just witnessed.

Wenger, meanwhile, had quipped in his post-match press conference, he felt to shoot from such a distance was "not the right decision, but he proved me wrong!".

Ramsey had remained modest in his initial reaction, but having seen the sublime finish replayed over and over again, the Wales midfielder hailed it as the outstanding strike of his career so far.

"I have just seen it back, and I thought it was a lot closer, but it was quite far out and definitely my best goal now," Ramsey said on www.uefa.com.

Despite the impressive victory, Arsenal, who had surrendered a 3-0 lead against Anderlecht on the fourth Champions League match day, were unable to secure top spot in Group D, with Borussia Dortmund going through to Monday's draw as seeds

That means Arsenal could again face one of Europe's heavyweights in the knock-out stages next year, such as defending champions Real Madrid, Barcelona, Paris St Germain or Bayern Munich.

Ramsey, though, believes the Gunners - who expect to be boosted by the return of Theo Walcott and Mesut Ozil by the next set of Champions League fixtures in February - can go into any such tie with confidence.

"We have done well, have qualified, we nearly came top of the group, but we finished off in style and hopefully now we will get a nice draw," he said

"On our day, we are capable of giving anyone a game, hopefully the draw is a bit more kinder to us this time."

Both Ramsey and midfielder Mathieu Flamini were taken off at the break with minor muscle problems, but they are expected to be available for Saturday's tea-time kick-off against Newcastle at the Emirates Stadium.

Podolski has been linked with a January move away from Arsenal following a lack of first-team opportunities.

The German forward, who scored his second goal on the break deep into injury time, was happy to be back in action and helping the team.

He told Arsenal Player: "I had the chance to play and I always want to score, give assists and play well.

It is not always easy to come in and do well, so it was good for me to do that."