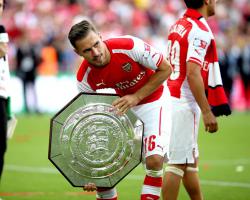 Ramsey believes Arsenal's first major trophy in nine years could now pave the way for a first league title since 2004.

"I definitely think we can win the league - we were top of the table for the most amount of time last season," Ramsey told Press Association Sport ahead of that win.

"The only thing we need to improve is our away record against the so-called bigger teams: if we had managed to nick the odd point or win in those games it would have been a lot closer last season, and maybe even we would have won.

"So that's something we can really focus on to work hard to improve.

"It's great news and extremely pleasing for us as players that he (Wenger) signed that new contract, he's done so much in this game and for the game, and for this club too.

"We're delighted that he's committed his future to the club again, and we're all looking forward to working with him for the next three years.

"Winning the league again would put him up there with the best managers ever in this league, no doubt.

"He's been very successful, he's built some great teams, helped some great players and hopefully now we can go on from last season and be successful again."

Despite finishing second and ending their trophy drought with the FA Cup, the Gunners failed to stay the league course last term - but Ramsey does not expect a repeat.

Wenger signed a new three-year deal at the end of last season, leaving 30-cap Wales star Ramsey delighted the Frenchman will add to his 18 years in north London.

"I think stability is vitally important for success," said Ramsey, speaking at the launch of McDonald's four-year community partnership with the home nation football associations.

"He's as excited as anybody about the new season, with the new players we've got coming in.

"He realises what this team can do and what he believes we can achieve, so we're all looking forward and excited to be a part of that.

"It's a big attraction to be at the club and be a part of things, in the way that he thinks the game should be played.

"He's a great man-manager, he knows how to handle players and what's best for them.

"The way that he believes the game should be played, his philosophy on the game is extremely exciting and gives players licence.

"He's very approachable and will always let players know how you can improve, or what you're doing well and things like that.

"So he's a great manager and all the players enjoy working with him and playing under him."