VAR: ​Can't live with it, want to live without it.

If you listen to the science boffins and technology experts, they'll tell you that on the whole, VAR is doing a pretty good job.

And it might be doing an accurate job, too. However, a lot of supporters up and down the country have quickly come to realise, precision might not be all it's cracked up to be.

And if VAR receives endless criticism for being used correctly, picture the pelters it gets when they actually get something wrong.

But which are the biggest fudge-ups of this season? 90min investigates. What happened? - ​Watford winger Gerard Deulofeu robbed Chelsea midfielder Jorginho in his own penalty, who then stuck out a lazy leg to stop the Spanish star. It was a clumsy challenge, and there may have been the slightest contact between the two players, but Deulofeu produced a very delayed dive to try and earn a penalty.

The referee was having none of it. VAR however, was. They overturned the no-penalty decision, and the Hornets pulled one back. Fortunately, it had little effect on the eventual outcome of the match. Soft. What happened? - ​Leicester City midfielder Youri Tielemans steps over the ball, and plants his right foot into the ankle of the onrushing Callum Wilson.

Whilst some may argue he was protecting the ball and not actually looking at the player when making the tackle, it was an ugly challenge and worthy of a red card. Yuck. What happened? - ​Newcastle bagged a crucial equaliser against fellow strugglers Watford back in August, but Fabian Schar's goal should have been chalked off for a handball in the buildup by Isaac Hayden.

Replays showed that Hayden clearly changed the trajectory of the ball with his arm after the cross reached the penalty area, but VAR failed to detect the offence, and the Hornets were forced to settle for a point.

A decision which ultimately cost Javi Gracia his job. What happened? - Having squandered a two-goal lead against Crystal Palace, ​Arsenal thought they'd pinched it at the death with a Sokratis Papastathopoulos strike. But VAR intervened, and deemed that Calum Chambers had committed a foul on Luka Milivojevic in the buildup, ruling out the goal.

Frankly, it was an absurd decision, as there seemed to be hardly any contact between the two players, and it was an incident that would have gone unnoticed without the beady eye of our video assistant referee. A sign of things to come.... What happened? - In a pulsating fixture between Brighton and ​Everton in October, the Seagulls were left chasing the game when Aaron Connolly collapsed in the penalty area with very little reason as to why.

However, VAR determined that Connolly had been fouled by Michael Keane, despite the fact that contact was minimal - at most - and Brighton dispatched the spot-kick, turning the game around to win 3-2.

An outrageous call, this one. 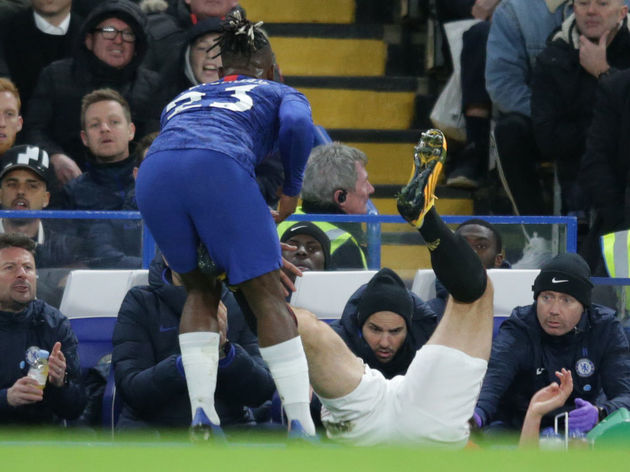 What happened? - ​Harry Maguire and Michy Batshuayi were chasing a ball down the line, and the pair collided off the field. Maguire, while lying on the floor, kicked the Belgian striker in the goolies. Ouch.

VAR took no action against the big centre-back however, and he went on to score the winning goal. You couldn't write it. What happened? - Giovanni Lo Celso produced a horrific stamp on Azpilicueta in the second half between Spurs and Chelsea, and the referee Michael Oliver did not brandish the red card.

VAR checked the incident, and despite the obvious and gruesome evidence shown in the replays, it was adjudged to have been the correct decision.

The officials at Stockley Park initially explained that they felt the Argentine had no other option than to plant his studs into Azpilicueta's flesh, but they have since admitted to making an error on this call.

We have a winner, folks.