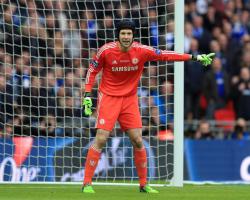 Cech is likely to be watching from the substitutes bench when Arsenal face Chelsea at the Emirates Stadium on Sunday, having made only four league starts this season

Jose Mourinho's men are 10 points clear going into the game this weekend but Parlour believes signing Cech in the summer can help Arsenal overcome the Blues next year.

"Cech would definitely be on my radar if I was Arsene Wenger," said Parlour, who was speaking at the Boot Camp stage of The People's Pundit, championed by Carlsberg - the Official Beer of the England team and the Premier League.

"Cech has got that experience, he's played in big games and he's only 33 so he's got plenty of years left in him.

"Wojciech Szczesny wants to play on a regular basis and you could still get good money for him, someone will buy him for around ÃÂ£6million.

"So it's a no-brainer really

If you can get Cech for around ÃÂ£10m and sell Szcezsny for ÃÂ£6m, it's a great deal for Arsenal.

"The question is will Chelsea sell to a rival? I'm not sure they will."

Arsenal can make it nine consecutive league victories with a win on Sunday and the team's strong finish to the campaign has given Gunners fans hope for a more sustained title challenge next year.

"The summer window will be very important to what happens next season," Parlour said

"The spine of the team needs strengthening - I think they need a centre half, a central midfielder and a goalkeeper.

"Alexis Sanchez has had a brilliant season, he's set the bar so high so early in his career that when he dropped off, it seemed like it wasn't the Sanchez we know.

"He has been amazing this season

If Arsene Wenger can get two or three players of his calibre this summer, there's no reason why Arsenal can't win the league next year."

"A draw is a perfect result for Chelsea," Parlour said

"They'll look to defend well and put in a solid performance so it's up to Arsenal to ask questions.

"With the pace they've got, Arsenal can test Chelsea's back four.

"John Terry has been brilliant this year but he does sit off a bit deeper now to allow for his lack of pace and that might give more space in midfield.

"Arsene will look at getting Sanchez into those spaces and perhaps Theo Walcott will start as well.

"It's a big, big game for Arsenal

Chelsea will win the league but there's still a battle for second, third and fourth so it's a bigger game for Arsenal than it is for Chelsea."

:: The People's Pundit has narrowed down its search to five football fans in with a chance of winning their big break on talkSPORT on the last day of the Barclays Premier League season

To vote for your favourite and find out which will win their big break on talkSPORT, head to ThePeoplesPundit.co.uk #PeoplesPundit