Real Madrid 2-2 Arsenal: Gareth Bale on Scoresheet as Los Blancos Fight Back to Win on Penalties

​Real Madrid fought back from two goals down to beat Arsenal on penalties in the pre-season International Champions Cup on Wednesday, with Gareth Bale in inspirational form for Los Blancos.

The game came just days after Zinedine Zidane revealed Bale had ​refused to play in an earlier friendly, but the Welshman entered at the interval on Wednesday and turned the game on its head. 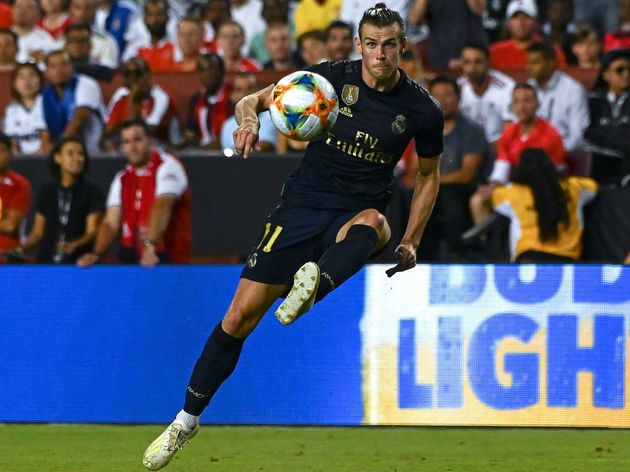 The first half could have hardly gone worse for ​Real, who were down to ten men after just nine minutes. Nacho was dismissed after he handled a shot from ​Alexandre Lacazette, and the Frenchman converted the subsequent penalty to put ​Arsenal ahead.

​Pierre-Emerick Aubameyang made it two soon after, rifling a shot off the boot of a helpless ​Sergio Ramos, who could only watch on as the ball deflected into the back of the net.

They were handed a lifeline shortly before the break as Sokratis Papastathopoulos was shown two yellow cards in the space of three minutes, so the two sides - both a man light - went into the break needing a reshuffle.

Zidane's answer was to introduce ​Bale to the fray, and it took the Welshman just 11 minutes to make an impact as he found himself free in the box to poke home a loose ball.

It's almost as if Bale is actually good at football. Shouldn't someone tell Zidane?

​Marco Asensio grabbed an equaliser just minutes later, and it was fully deserved. Real had come flying out of the gates in the second half - it's crazy what happens when good footballers are on the pitch.

Bale still has it man, there's no question. Just needs to be loved.

Gareth Bale hearing Zidane wants to speak to him in his office after the Asensio injury. pic.twitter.com/X0SC0eYONP

Unfortunately, it wasn't all good news for Real, who lost Asensio to a nasty knee injury, and there appears to be a real fear that the Spaniard could be set for a lengthy spell on the sidelines.

The injury seemingly sucked the energy out of Real and allowed Arsenal back into the game, and the Gunners would have stolen a late victory if it had not been for Bale, who cleared a certain goal from ​Calum Chambers off the line. The two sides ultimately needed penalties to separate themselves, and Bale looked to have cost his side as his tame effort was comfortably saved by Emiliano Martinez to give Arsenal an early advantage.

However, later misses from Nacho Monreal and young Robbie Burton saw them hand the game to Real, who moved top of the ICC table with three points (even though nobody cares).