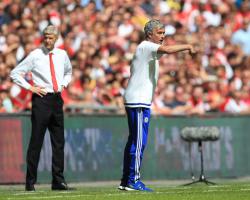 Finally Wenger has a victory over Mourinho after Alex Oxlade-Chamberlain's first-half goal earned the Gunners a 1-0 win in the season-opening Community Shield at Wembley.

Mourinho made a point of congratulating the Arsenal players afterwards as Wenger walked behind him, their long-running feud showing no signs of coming to an end.

"I shook a few hands today after the game, but there's nothing special there," said Wenger, who shoved the Blues boss in last season's Premier League clash at Stamford Bridge.

"I believe in a job where you have to respect people and respect everybody."

Mourinho said: "You see the images, you see where I am

(I was) there for the winners, to wait for them in a point where you only miss me if you want to miss me.

"Every Arsenal player came in my direction, which was the easiest thing to do.

Mourinho felt the better team lost, but was pointed in his praise of Wenger's approach, saying Arsenal were "a team that leaves their philosophy in the dressing room".

"If you want to be pragmatic, like I normally am, I say in a simple way, they score, they didn't concede

Mourinho insisted he did not have a psychological hold on Wenger's teams, but described his 13-game unbeaten streak as an "eternity".

"What happened before is not normal," the Blues boss said.

Thirteen matches is an eternity, it's too much."

But Wenger, who disagreed that he compromised on his approach, felt the prior record against Mourinho played on his players' minds and contributed to their display.

The Frenchman said: "We abandon nothing

I believe today we defended because maybe it was a bit of a psychological hurdle, Chelsea, in the head of my players.

"Personally I must honestly say it didn't play on my mind at all.

It was important for them to get that hurdle out of the way.

We have to accept that.

"I don't think that's giving up your philosophy

I'm quite proud of that."

Arsenal had Petr Cech in goal after his 11 trophy-laden years at Stamford Bridge.

Wenger said: "He did well and maybe he had an influence on the Chelsea players as well.

"They feel to score against him they have to score the perfect goal."

Wenger, who said midfielder Jack Wilshere (ankle) will be out for only "days", now wants his Arsenal side to carry momentum into next week's Premier League opener with West Ham.

Mourinho, whose side begin their title defence against Swansea and may again be without Diego Costa, who missed Sunday's game with a hamstring problem, threw his runners-up medal into the crowd.

He said: "I don't want the medal

"The kid was there, an Arsenal kid and I think it's a good memory for him

His team wins and he takes a medal from the losers."