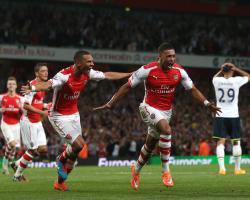 After Gunners captain Mikel Arteta and Aaron Ramsey had both been forced off with injury, Spurs midfielder Nacer Chadli put the visitors ahead against the run of play on 56 minutes.

Arsenal, who go to leaders Chelsea next weekend, finally made their possession count when Alex Oxlade-Chamberlain smashed home an equaliser.

However, despite pushing forwards during the closing stages, Spurs - inspired by a stand-out performance from captain Younes Kaboul - held out for a share of the points.

It has been a bright opening by Arsenal, with Ramsey and Mesut Ozil interchanging between the number 10 role behind Danny Welbeck.

England forward Welbeck, the Â£16million deadline day signing from Manchester United, showed Jan Vertonghen a clean pair of heels with a clever flick on the half-way line and sped to the edge of the penalty area, where, in a sign of what was to come, Kaboul darted across to block

On 24 minutes, Spurs goalkeeper Hugo Lloris had to be alert as Oxlade-Chamberlain's deflected cross from the right was looping under the crossbar before it was tipped away by the France international.

Lloris was then grateful a 20-yard drive from Jack Wilshere was straight at him following more patient build up by Arsenal and a lay off from Welbeck.

Arsenal had to make a change on 28 minutes when captain Arteta pulled up with what looked like a calf injury, and was replaced by Mathieu Flamini, fit again after a dead leg.

Wilshere then turned his ankle when pressing into the Spurs penalty area, where he looked to be tripped by Danny Rose, but after limping off for treatment was able to play on.

When Spurs did hit on the counter, a deep ball from right-back Kyle Naughton dropped through to Emmanuel Adebayor at the far post, but the former Arsenal striker hesitated and was closed down.

As Per Mertesacker jumped with Vertonghen at a Spurs corner, the big German headed the ball goalwards, which Arsenal goalkeeper Wojciech Szczesny did well to hold at close range.

Lloris got down quickly to deflect away a low, curling effort from Oxlade-Chamberlain after Ramsey had run across the edge of the Tottenham penalty area.

The Wales midfielder was, though, soon on the floor clutching his hamstring as Arsenal were forced into another change just before the interval with Santi Cazorla coming on.

Arsenal started the second half in determined mood, as Kaboul had to block an angled drive from Cazorla after good work from Wilshere, who seemed to have run off his knock

Lloris then made a smart save after Ozil was played into the right side of the Spurs penalty area.

It was Spurs, though, who took the lead against the run of play on 56 minutes.

Christian Eriksen robbed Flamini in midfield, and fed Erik Lamela who in turn played Chadli clear on the right side of the penalty area and he slotted the ball under Szczesny.

Arsenal looked for an immediate response and almost got one as Mertesacker's downward header from a free-kick was clawed off the line by Lloris.

Wilshere was replaced by Alexis Sanchez, the Â£32million Chile forward sent on to inject some life into the Arsenal attack for the closing 25 minutes.

Referee Michael Oliver needed to keep check on some hefty challenges coming in from Spurs, with midfielder Ryan Mason, making his Premier League debut, the third player booked in the space of a few minutes for clattering Ozil.

Chambers was inches away with a rising 20-yard drive, but Arsenal were level on 74 minutes.

Welbeck missed his kick from six-yards out after a cross had been played in from the right, but Oxlade-Chamberlain was on hand to smash the loose ball into the top corner.

Kaboul continued to almost single-handedly fend off wave after wave of Arsenal attack, which continued during five minutes of stoppage time, but Spurs held out