Roberto Firmino or Dennis Bergkamp: Assessing Who Should Be Considered as the Better Player

​Liverpool are cruising towards their first ever Premier League title, with each individual player having praise heaped on them as a result of their outstanding displays.

Who is their most important player though? Some will say Virgil van Dijk, while others will say Sadio Mane or Mohamed Salah, or perhaps Trent Alexander-Arnold or captain Jordan Henderson. The list goes on. However, Roberto Firmino is undoubtedly a key player for the Reds and yet, his role and importance to the team is often not appreciated as much as it should be.

TalkSPORT presenter Adam Catterall came out with quite a bold claim about Firmino while ​speaking on the Drive show, saying that while the other Liverpool players are, of course, 'exceptional', he is the glue that keeps them all together.

 Roberto Firmino is 'better than' both Bergkamp and Cantona

However, he then claimed that Firmino is the best Brazilian to ever grace the Premier League. And, with Catterall clearly in no mood to tiptoe around the topic, he went on to state that he is, in fact, better than both Dennis Bergkamp and Eric Cantona - two players that have often been described as some of the best players to ever grace the league.

So with this in mind, we kind folk at 90min have decided to settle the debate. We have taken a look at the attributes of both Firmino and Bergkamp to decipher who's the better player. Enjoy... Let's get the obvious one out of the way, shall we?

It's a close call, with both Firmino and Bergkamp hugely influential players in all aspects of the game, while they have also found the net a fair few times as well. However, Bergkamp edges this due to the sheer excellence and variety in the goals he scored from different areas of the pitch. As previously touched on, both players' games are so much more than just finding the net. Firmino is often described as the glues that keeps the team together, the player that makes them tick.

He drops deep when his team are in possession, finding pockets of space before looking up and playing a sumptuous pass through to, most likely, one of the attackers to score. This is backed up by the fact that on top of the 76 goals he has scored for the Anfield side, he has also provided 59 assists in his 228 appearances. Similarly, he also provided 36 assists in 153 games during his spell in Germany.

As for Bergkamp, while he only managed 13 and three assists at Ajax and Inter respectively, he did set up 94 goals during his time at ​Arsenal - an all-time club record. This also places him fifth in the all-time Premier League top assisters list.

The Dutchman was a magician on the ball and while the numbers speak for themselves, they do not paint the complete picture. Bergkamp's passing and awareness of other teammates' positions was phenomenal and, as a result, he pips Firmino in this department. One of ​Bobby Firmino's major strengths is his awareness and understanding of the game. He knows when to drop deep and when to run in behind, making him an absolute nightmare to defend against.

Equally, not only can he score goals as well as provide assists, he acts as a link between the midfield and the attack. Picking up the ball, if there is no better option available, he has the ability to weave his way through opponents, dancing through challenges before looking up and playing a pass.

Bergkamp, meanwhile, forged a reputation as a footballing artist. While his stats were impressive, they still didn't do him justice. His vision was extraordinary, while his close ball control was second to none, lulling defenders into a false sense of security before producing a moment of magic.

Bergkamp had the ball control and the ability to never allow a defender to get close, but in terms of dribbling, Firmino has proven during his time at the highest level that he is a real threat when moving with the ball at his feet. 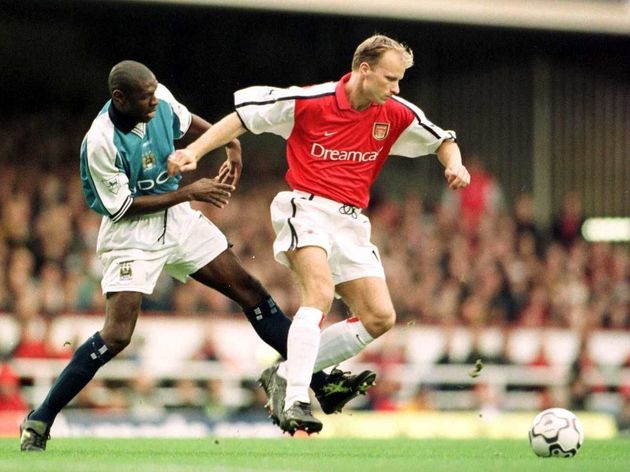 Firmino may not be the tallest player and he may not be the strongest, but he certainly knows how to use his body, while he also has the technical ability to shield the ball from his opponents. His tireless work and desire to hold the ball up also allows his teammates to get into the best positions.

The best part is not only does he hold the ball up, he often then sets a player through on goal or plays a penetrating pass.

Bergkamp himself wasn't exactly bad at holding the ball up either. In fact, his balance, movement and close control meant that defenders were unable to touch him, and if they considered getting tight to dispossess him, he would simply find a way past them. This, mixed with his vision and ability to create space for others, is part of what makes him so special.

Firmino is excellent at holding the ball up, but it is Bergkamp who gets the nod on this one. Settling the debate, it is Dennis Bergkamp who comes out on top, proving to be superior in three out of the four criteria.

Firmino is undoubtedly a world class talent and the fact that he is receiving so much praise and yet people still consider him hugely underrated merely reaffirms that.

However, Bergkamp was an artist, a magician, and he provided football fans from around the world with countless unforgettable moments.