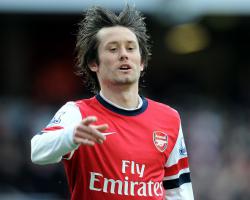 Rosicky is out of contract at the end of the season, however manager Arsene Wenger revealed a deal is all but done to extend the 33-year-old's stay at the Emirates Stadium.

The veteran midfielder - who scored a well-crafted goal in the 4-1 win over Sunderland when he stepped into the side for injured Mesut Ozil - has seen his Arsenal career hampered by a run of injuries since arriving in 2006 from Borussia Dortmund, where he had been nicknamed "The Little Mozart" for his creative style.

Rosicky, though, has no doubts he in the right place to help Arsenal finally end their long trophy drought.

"I always believed in it here at Arsenal and still do

I knew this club was the right place for me and I want to be here for as long as I can," Rosicky said in the March edition of the official Arsenal magazine.

"It is obviously very difficult to predict how long I can go on for, (but) I feel very good

"All I can say is that I still have a big passion to achieve things and that is really important.

"You must have that force, that drive to go on and achieve something and I definitely still have that.

"I was nearly out of the game because of injury, so I have a different approach now because I know it could end at any point

I just want to be successful with Arsenal."

Rosicky - who did not feature for the Gunners during the entire 2008-09 season because of a hamstring tendon injury - added: "I won three titles in the Czech Republic before I left (Sparta Prague), I won the Bundesliga with Dortmund and I still believe I can do it here.

"I wouldn't stay here if I didn't believe.

"The idea of winning the (Premier) League and the Champions League really drives me forward, I love it."

Arsenal responded to their midweek European disappointment of losing 2-0 at home to Bayern Munich with the required response as they blitzed the Black Cats, who contest the Capital One Cup final against Manchester City next weekend.

The Gunners remain just a point behind leaders Chelsea, and two clear of Manchester City, who do hold a match in hand.

Boss Wenger feels this season's open championship race could well go down to the wire.

"It looks like the last game could be decisive

What is for sure, the most consistent team from now on will do it," Wenger said on Arsenal Player.

"We have just come off of a little bit of a difficult run because we lost at Liverpool, we played a draw against Man United and we are still only one point behind Chelsea so overall that is a great encouragement.

"Let's go for the 11 games with a real desire to do well in every single game - then you have a good chance."

Ozil is expected to shake off his dead leg for the trip to Stoke next weekend.

Wales manager Chris Coleman has revealed midfielder Aaron Ramsey is targeting a possible return from the thigh injury which kept him out since Boxing Day, and so unavailable to join up for international duty, for the second leg of Arsenal's Champions League tie in Munich on March 11.