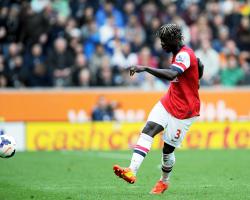 His contract expires next month and despite Arsenal manager Arsene Wenger's bid to keep him at the Emirates Stadium, the 31-year-old said he wanted a new challenge.

"I've decided to leave Arsenal, the club where I grew up

It's the time to throw myself into a new challenge

"I've had great times but it's the time to leave," said Sagna, who arrived from French side Auxerre in 2007.

"Last year I had a difficult season when I realised that we would struggle to find an agreement," he said

"It's been on my mind for quite a while now."

Sagna, who has been linked with a move to Premier League champions Manchester City, said he wanted to tie up his future before the World Cup starts on June 12.

But he refused to confirm his next destination, only saying: "I'll fix that before the start of the World Cup."

Sagna is currently training with France's World Cup squad and conceded that the FA Cup Final victory over Hull was his last action in an Arsenal shirt.

"There is no ideal end but it was a dream to finish like that, at Wembley, with the cup," he admitted

"It was an honour to wear the shirt."