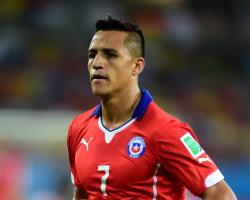 Sanchez joined the Gunners for a fee in the region of Â£35million from Barcelona, where he scored 47 goals in 141 appearances.

The 25-year-old forward also scored two goals for Chile at this summer's World Cup in Brazil.

"Sanchez is a world-class player and I enjoyed watching him play for Barcelona and for Chile at the World Cup," Walcott told Arsenal Player.

"He's still very young as well and he is going to show so much pace and power, which we lacked a bit last year.

"With me and him on the flanks, a lot of teams won't be looking forward to playing Arsenal this year."

The signing of Sanchez represents something of a coup for Arsenal, who splashed out Â£42.4m on Germany midfielder Mesut Ozil last year.

Walcott believes both transfers demonstrate the ambition of the club and admits he is excited to see who else will be brought in.

"There's a great buzz around the club at the moment," Walcott said

Who knows where it is going to stop?

"It is great to learn from these players, and I cannot wait to play alongside him

I am really looking forward to it."

"The knee is going really well, I am doing some good stuff with the physios and fitness coaches and we have worked really hard throughout the summer," Walcott said,

"The most important thing is getting the strength back and it has pretty much nearly healed - it is just about building up that stability and strength again.

"It is coming along nicely and I am really pleased."