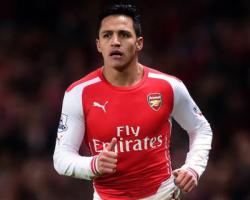 The Gunners went down 2-1 at White Hart Lane on Saturday, hit by a second-half double from Harry Kane to turn the match around after trailing to Mesut Ozil's early volley.

Arsenal are now down in sixth place, but could move up to third should they produce a much-improved display to see off the out-of-form Foxes.

Chile forward Sanchez has plundered 18 goals this season, but was not risked against Spurs because of a hamstring strain.

Wenger, though, is expecting the ÃÂ£32million signing from Barcelona to boost his options on Tuesday night.

Everybody else looked fine yesterday," said Wenger, who confirmed midfielder Alex Oxlade-Chamberlain was still out with a groin problem and Jack Wilshere was set to join full training following recovery from ankle surgery.

"He is our best goalscorer and one of our hardest-working players in the team.

"Physically I think we suffered a little bit on some occasions on Saturday and it is good to have him back."

Wenger is confident Arsenal can quickly get the poor display at Tottenham out of their system, having gone into the match on the back of five straight victories.

"We just have to focus on our game," Wenger said.

"We are responsible for what we produce on the pitch and we have to continue to move forward and deal with all the rest.

"The rest is not to influence us

What is important is that our ambition and the way we want to play has to be the strongest influence.

"We had a very strong run just before Saturday

We just want to continue that and respond very strongly to the disappointment."

Leicester manager Nigel Pearson will lead his team at the Emirates Stadium, the club having released a statement to deny reports he had been dismissed on Sunday evening.

Wenger is not expecting a walk-over.

He said: "They are a team who fights to survive in the Premier League, that means it demands a complete focus from us."