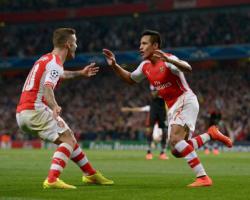 Arsene Wenger's team missed a succession of chances to put the qualifier beyond the reach of Besiktas following a goalless draw in the first leg in Istanbul, with a 1-0 win putting Arsenal through.

Sanchez, Santi Cazorla and Alex Oxlade-Chamberlain failed to score when it was harder to miss amid the mayhem of a roller-coaster second half in which Mathieu Debuchy was sent off for collecting a second yellow card.

Frantic Arsenal almost paid the ultimate price as they were over-run time and again by Besiktas who sought the away goal that would secure a prized European scalp.

The Turks' coach Slaven Bilic, sat in the stands due to his touchline ban for arguing with referee Milorad Mazic in the first leg, watched as Demba Ba crashed a great chance into the side netting.

It was the best of Besiktas' opportunities, although Bilic was furious that a penalty was not awarded when Ramon Motta appeared to be clipped from behind by Jack Wilshere.

Sanchez's goal on the stroke off half time enabled Arsenal to progress into the Champions League proper for a 17th successive season, but they rode their luck against spirited opposition to subject their fans to a nail-biting night.

The Â£35million summer signing from Barcelona operated as the lone striker in the absence of Olivier Giroud, who is thought to have been ruled out until the New Year with a tibia injury.

And while Sanchez struck the all-important winner that guarantees Arsenal's presence in the draw for the group stage, he was also wasteful.

The Gunners should have taken an early lead after he was nudged over and referee Pedro Proenca played advantage, but Wilshere sent a fine chance wide of the right post.

The early onslaught continued with Cazorla failing with an audacious lob and Sanchez proving unable to reach the ball after Oxlade-Chamberlain had sped free down the right.

Ba threatened to collect a long ball at the other end with only Wojciech Szczesny to beat, but the Poland keeper arrived at the critical moment.

Sanchez sent a free-kick into the arms of Tolga Zengin before Mathieu Debuchy and Ersan Gullum collided in mid air with a thud.

The Turks were defending resolutely, crowding Sanchez out as the Chile winger attempted to capitalise on a floating pass by Oxlade-Chamberlain.

And they threatened in attack too as Motta teed up a shot after gathering a cut back only to crash to the ground following a challenge by Wilshere in the area.

Replays proved inconclusive over the extent of any content, but Proenca was satisfied there was no penalty, drawing howls of protest from the noisy contingent of Besiktas fans

A poor first touch from Sanchez prevented him from making the most of Wilshere's deft pass, but on the stroke of half-time the South American opened his Arsenal account.

Besiktas failed to clear the ball properly and Mesut Ozil combined with Wilshere, who left the German's final ball for Sanchez to guide into the net.

Having just ridden their luck in their own area, the goal came as an enormous relief and Sanchez was mobbed by his jubilant team-mates.

Sanchez was a metre away from making it 2-0 five minutes after the interval but he was beaten by the speed of Cazorla's pass and he should have done better moments later when set up by Wilshere.

Still Arsenal's defence could not rest, however, as successive raids into their area were met with scrambling responses.

And the point was emphasised when Ba smashed a brilliant opportunity into the side netting knowing he should have done much better.

Cazorla hit the right post and with Besiktas caught on the counter, somehow Sanchez and Cazorla failed to put the match beyond the visitors' reach.

Debuchy received his marching orders, if a little unfairly as he won the ball in the tackle, and from then on Arsenal defended for their lives in a hair-raising finish.