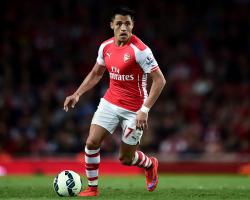 The 26-year-old arrived at the Emirates Stadium last summer, with the Gunners forking out a reported ÃÂ£35million to sign him from Barcelona.

That success saw him last month make the six-strong shortlist for the PFA Player of the Year award and has now seen him win the PFA's fans' award.

More than 200,000 votes have been cast since the 10-man shortlist was announced at the start of this month, with Sanchez beating Chelsea's Eden Hazard and Manchester City striker Sergio Aguero to the award.